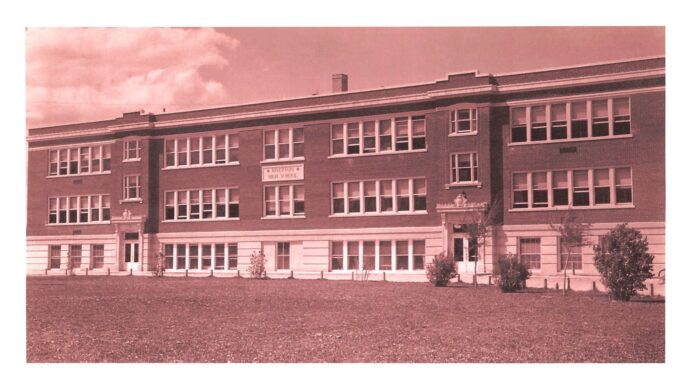 Plans for the construction of the original Riverton High School began in 1920. An article from the Riverton Review from March 17th, 1920, discusses the process of selecting a site for the building:

The members of the Riverton School Board are laboring to select a site for the location of the proposed new high school building. Three offers have been made in various parts of town and each one is being considered from every point of view its nearness to the greatest number of people in the years to come; its playground facilities, the immediate cast of ground facilities, the immediate cast of ground, in which they are regulated by law, and all other matters entering into the making of a successful school.

A committee was organized by the school board to examine each possible location for the new school. Another newspaper article from the Riverton Review dated May 5th, 1920, describes the committee’s thought process.

At first, the committee liked the idea of acquiring land near the business center of Riverton. However, the committee feared that local business owners would dislike the idea of having a schoolhouse so close to their businesses and would try to hinder the efforts of the committee. The committee approached Earl Warren to help assist the committee with finding some land near the business center discreetly. Warren was able to find a piece of land beside A.N. Holmberg’s residence on the corner of North Broadway and Park Avenue for the price of $5,000. The committee decided that they could not afford to purchase the land that was only slightly above an acre for the construction of the schoolhouse. In addition, the property was located near the railroad, which the committee believed would eventually transform into a warehouse district, if the town of Riverton was to grow. Eventually, due to the high price, small size, and location of the land, the committee abandoned this option for the new school site.

At about the same time that the land beside the Holmberg residence was rejected, the Riverton School Board became concerned that they did not have the authority to decide upon a site for the new school. The school board decided to hold a special vote about the matter. A public meeting was called and the people present voted unanimously to delegate the responsibility of selecting a school site to the school board. Immediately after the meeting, a notice was published in the local papers asking landowners to make proposals in writing to the school board offering land as a potential location for the new high school.

One proposal was for two adjoining pieces of land offered by The Riverton Valley Irrigation Company and Hans Berlin for a total price of $750. They were located at the top of the hill near Main Street. The committee decided to look into acquiring some of the lands at the top of the hill because they had decided that this location was the most favorable option for the school. At first, the committee was not inclined to pursue this option because there was very little level ground on either side. The committee then turned their attention to a piece of land adjoining the land being offered by Mr. Berlin. This piece of land was being offered for sale by E.H. Lulkart, Sheldon, and Dobler for $3,000. The committee decided to ask Earl Warren to make an offer on the land for $2,000. The offer by the school district was accepted for this piece of land. However, before officially entering into a contract, the committee wanted further assurance that the issue of the hill grade could be reduced for the construction of the school. E.H. Lulkart, Sheldon, and Dobler agreed to construct a concrete siphon, which is designed to bring water up from a low spot to a high spot where gravity cannot be used. The siphon would reduce the grade of the hill from fourteen percent to about seven percent. In addition, Earl Warren agreed to fund the extension of the sewer system through the Ash Grove Addition at no cost to the school district for the school to use and to contribute $300 to the extension of the sewer system from the railroad in the opposite direction. With these additional assurances, the committee decided to propose the land owned by E.H. Lulkar, Sheldon, and Dobler for the location of the new Riverton High School to the school board.

On April 12th, 1920, a meeting of the school board was held to vote on the piece of land selected by the committee. During the meeting, Dr. A.H. Tonkin was called away before the matter could be voted upon. The remaining board members voted to approve the committee’s proposal but decided to not make any public announcement until a detailed statement could be made to the public. Before the announcement could be made, the City of Riverton made a written proposal to the school district to lease part of the Riverton City Park to the district for the construction of a school for a period of 99 years. Due to Dr. Tonkin’s absence from the vote, there were some questions about whether the vote had been officially completed by the school district. The proposal from the city was also considered by the school district before the site on top of the hill was officially selected.

The construction bid for the new school was awarded to J.A. Johnson, a contractor located in Casper. The plan for the new Riverton High School was a four-room school with separate entrances for boys and girls, although the separation only lasted a few years. The construction began in 1921 and was completed in 1924. In 1949-1950, a gym, swimming pool, band room, and home economics room were added. In 1958, an administration building, an agriculture building, and a shop building were added to the school.Additional renovations were made in 1965. These renovations included the addition of sixteen new classrooms, an elevator, a corridor from the agriculture and administration buildings to the main building, a remodel of the band room, and a remodel of the guidance counselor room. The original school was demolished in 1981, and replaced with the new high school on West Sunset.

Sept 3, Noon at the Riverton Museum, “Jim Bridger: Trailblazer of the American West” by Jerry Enzler