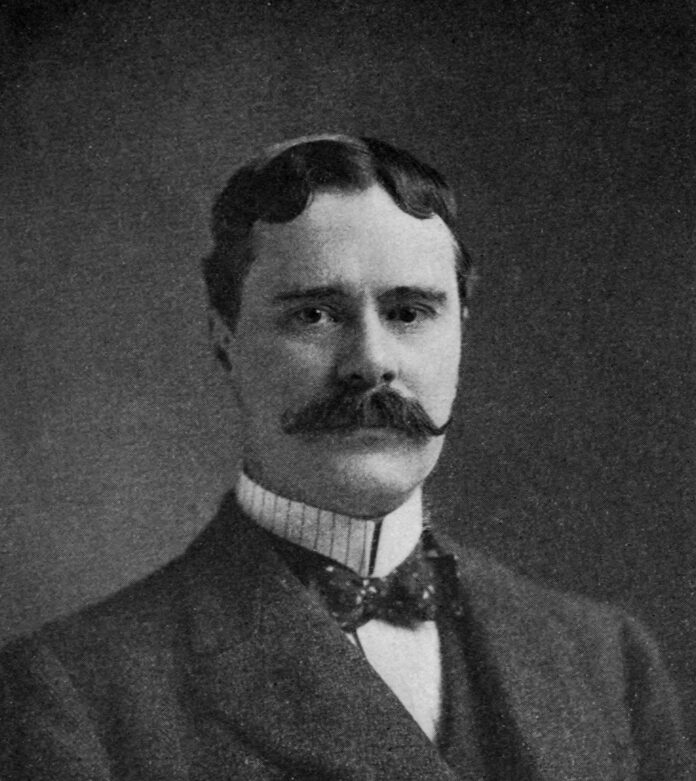 In the summer of 1885 when he was 25, Owen Wister made his first journey to Wyoming.  His doctor had prescribed a trip to the West to improve his health and his spirit.  His time in the West would change his life forever.  He was struck by the natural beauty of the land and the clean fresh air, and especially the rugged individualism that permeated the friendly people he encountered. His traveling companions were two women in their forties who were friends of his mother. They spent the summer with Frank Wolcott, who later became a leader of the Johnson County War. On Wolcott’s ranch they lived the ranch life.   Over the years, Wister became quite paternalistic about Wyoming fearing it would, ”New Yorkify”, and lose its charm. When he returned many years later he felt his fears had been realized and the West he had loved had vanished.

In the Fall of 1885, Wister returned to the East to continue his studies at Harvard.  Among his friends at Harvard was Theodore Roosevelt who also had a love of the western lifestyle. Wister went on to earn a law degree.  Wister returned to Wyoming in 1887 taking the stagecoach from Rawlins to Lander.  He checked into the Lander Hotel on July 30, 1887.  The register he signed is in the collection at the Pioneer Museum and is on display.  He continued onto Fort Washakie and outfitted an expedition to Jackson Hole. He hired Tigee, a well-known Shoshone guide to lead his group through the mountains.  He also hired Jules Mason and George West to pack for this team.  They became long-time friends. He made many friends in Wyoming and kept journals about his experiences.  He used these journals as source material when he changed professions from a lawyer to a writer.

Wister fell in love with the Wind River Mountains; he enjoyed hunting and fishing. He killed his first grizzly bear just across the continental divide. Tigee had killed an elk and used part of it to bait the bear.

The next year he returned to Fort Washakie and hired Paul DeRose and Dick Washakie, the son of Chief Washakie along with Jules Mason and George West to guide his party into Yellowstone.

In 1889, Wister returned and while on the train met one of the men accused of killing Cattle Kate and James Averill. He liked the man and hoped he would not be convicted. Wister always seemed to side with the big landowners, many of whom had sent their sons to Harvard. Wister took many photographs during his visits to Wyoming including photos of J.K. Moore, the owner of the trading post at Fort Washakie, and a photo of Chief Washaki when the chief was in his nineties.

His trip to Wyoming in 1890 seemed to be a turning point in his writing career. His notebooks from 1890 were full of details that would be incorporated into his novel, The Virginian.

Wister’s first novel, Lin McLean was published in 1898, but his most significant work was The Virginian published in 1902.  The Virginian is considered by many to be the prototype of the American Western novel with a noble cowboy who fights an evil villain and gets the girl in the end.  Over the years, the formula has been copied by writers such as Zane Grey and Louis L’Amour. In many ways, the myth of the American West poured out of the pen of Owen Wister from his experiences while visiting Wyoming. The myth was established for generations of readers and movie goers.

BTI is hiring – Drive for the best and be home every night!