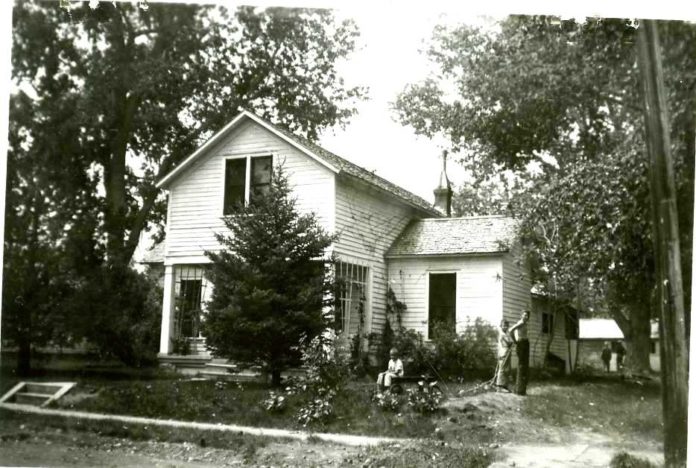 Minnie was born in New York in 1869, to Savina and Lewis Morgan Hulett. When Minnie was a youngster, her family moved to the eastern part of the Dakota Territory. Later in the fall of 1881, the family moved again to the northeastern part of Wyoming Territory where they settled at the mouth of Blacktail Creek. After seven years, Lewis Morgan Hulett became the first postmaster at the town that bore his name Hulett, Wyoming, located in what is now Crook County. After her childhood, Minnie moved to Lead City, North Dakota, where she met Pete Snyder. Minnie and Pete Snyder were married on December 23rd, 1889. After six years of marriage, Minnie and Pete decided to move to Wyoming shortly after they announced Minnie’s pregnancy. Unfortunately, in 1895, the couples’ baby died during the journey west near Belknap Ranch located in northwestern Wyoming. After the death of their baby, the couple continued west to their claim, thirty-eight miles southwest of Cody City.

One year later, at 8:30 pm on April 2nd, 1896, the Snyders would commit a crime that would lead them both to become residents at the Wyoming State Penitentiary. Clay McBroom, Graham Morton, and Sam Aldrich were sitting in Sam Alrich’s log cabin playing a game of Whist, a card game like Bridge, while Carl Sorenson watched the game. In the middle of the game, a shotgun blast came through the window and grazed Aldrich in the back of the head. After coming back to their senses, the men went outside to see that the shooter had disappeared. When morning came, W.E. Pierce led a search to find evidence of the shooter. They found a set of tracks made by women’s shoes near the Aldrich cabin that they followed to the outer fence where a horse had been tied. Based on the horse’s hoof prints, they identified the horse as Mrs. Snyder’s horse. Furthermore, the trail of the hoof prints led to the barn at the Snyder’s Ranch.

The group of men concluded that Minnie Snyder had ambushed them in the cabin while Peter Snyder went for supplies. While the men waited for Peter Snyder to return, they informed the authorities in Marquette of the attempted murder. When Peter returned to the ranch, he and Minnie decided that their lives might be in jeopardy, so they departed for Marquette on April 6th to seek protective custody. En route to Marquette, the Snyders stopped at John Rooks’ ranch and left a note with a hired hand, Harry Jordon, about their plans. The entire truth is not clear because the only testimony to survive comes from the side opposing the Snyders. After the couple left John Rooks’ ranch, Harry Jordon, rode to Sam Aldrich’s cabin to tell him of the Snyder’s plans. Aldrich, Graham Morton, W.E. Pierce, and Jordon grabbed their rifles and rode about a half-mile ahead of the Snyder’s wagon to wait for Constable Sam Scott to arrive with arrest warrants. Suspiciously, John Rook and William Nichols began following the couple’s wagon also armed with rifles, which sandwiched the couple between both parties. Pete Snyder must have seen one or both of the parties because he decided to pull over the wagon. This started a gunfight that ultimately resulted in John Rooks’ death. Harry Jordon testified that he saw Pete Snyder shoot John Rook during the chaos. Eventually, the Snyders were apprehended by William Nichols and Sam Aldrich’s men. The couple was escorted to George Marquette’s ranch while one man went to call the sheriff in the Black Hills who took custody of the Snyders.

On April 19th, 1896, Constable Benedict escorted the Snyders to Lander where they awaited their preliminary hearing. The indictment prepared by Fremont County’s Prosecutor James S. Vidal charged the Snyders with the premeditated murder of John Rooks. The prosecution also filed a separate charge against Minnie Snyder for the attempted murder of Sam Aldrich. However, due to a lack of evidence, the prosecution dropped to a charge of attempted murder against Minnie. She still faced charges as an accomplice in John Rooks’ death. Pete and Minnie’s trials were held on June 11th, 1896, in the Fremont County Courthouse. By Sunday, June 14th, the jury had reached a guilty verdict. Pete was sentenced to ten years and Minnie was sentenced to six years at the Wyoming State Penitentiary.

How Can You Help Fremont County Museums?