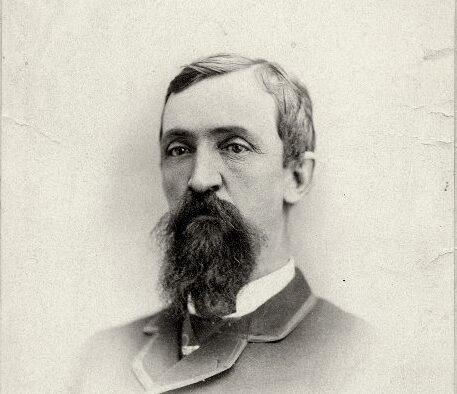 Matilda Johnson was born in Champaign County Illinois on November 10, 1844. She
married Thomas A. McCoy in Iowa in 1868; the couple promptly came to Wyoming to
work on the Transcontinental Railroad. They worked on a team with 60 men from
Missouri who brought their teams and wagons along to work on grading the causeway
the rails would follow. Finn Burnett and his brother Eugene Burnett were part of this
grading team. Matilda was the only woman on the team. The team started working 4
miles east of Fort Steele, Wyoming and finished up at Pass Creek Nevada. She was
present at the joining of the Central Pacific and the Union Pacific Railroads at
Promontory point Utah and soon after witnessed the driving of the golden spike that
formally completed the Transcontinental Railroad that joined the East Coast with the
West Coast.
After the railroad was completed, Tom and Matilda came to South Pass in the Spring of
1869 when the gold mining towns of South Pass, Miner’s Delight, and Atlantic City were
booming. Finn Burnett, who would become the agricultural agent on the reservation,
was with them. In the Spring of 1870, the family moved to Big Sandy Station on the
Green River to South Pass Stage line and ran a stage station about where Farson is
today. Mr. McCoy became the superintendent of the stage line, so Matilda was
frequently left alone to run the stage station with two children to take care of. Tom and
Matilda had three children together, two daughters and a son.
In 1882, Tom McCoy was elected to the Seventh Territorial Legislature as a
representative of Sweetwater County. Matilda was left to manage the stage station
while he was gone. Another pioneer woman, Amelia Lyons Hall stayed at the Big Sandy
stage station. Amelia later settled in Lyons valley with her husband, and the valley is
named for her. In Amelia’s memoir she wrote:
“Our next stop was at Big Sandy Station. We stayed over one day and took the coach
the next night. I thought what a brave woman Mrs. McCoy was to live in such a place
with her two little girls, alone most of the time, and always in danger of Indian raids. I
wonder if I could be as brave and what kind of pioneer woman I would make. She was
so glad to have us stay. I felt I had found a real friend in the West and our friendship
lasted as long as she lived. She gave me a canary bird and for years it was so much
company. It always sang of a little log cabin in the mountains and of love and
friendship”
In 1883, the family moved to Fort Washakie where they ran the J.K. Moore Hotel. They
had to pay $50 a month in rent for the hotel. Tom McCoy died suddenly and
unexpectedly in October of 1884. Matilda and her children then moved to Lander.

Her husband, Matt Borland died in March of 1916.