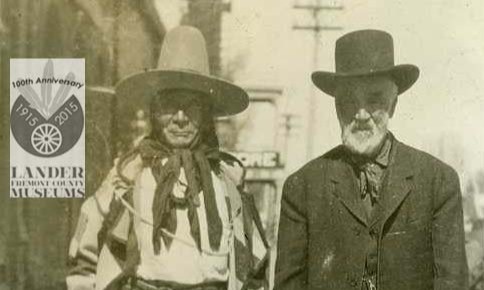 One of the early people who settled in Fremont County on the reservation was John Enos. He settled on the Wind River Reservation in the early 1870s. Chief Washakie invited him to come down from Montana and make his home on the new reservation. Washakie granted him a large spread of land roughly from Morton to Diversion Dam. John Enos was about 60 when he and his family arrived, but he had been here in the early years of settlement and exploration. He was neither Shoshone or Arapaho by blood, but he was adopted into the Shoshone nation.

The blood of many nations flowed through his veins. On his father’s side he was French, English, Algonquin and Iroquois, His mother was a member of the Flathead nation. His mother and Chief Washakie’s mother were sisters. He fluently spoke, Flathead, Sioux, Shoshone, English, Spanish, and French. He witnessed and participated in much of Wyoming’s early history.

He was born in Montana in 1811 to Ignacus Moses Enos, a Hudson Bay voyager and an employee of The American Fur Company and a Flathead woman. According to John Roberts, the Episcopal priest on the reservation, as a young man Enos was baptized by Father Pierre-Jean DeSmet, an early Belgian Jesuit Missionary who travelled through the West from 1840 to 1851. When DeSmet first came West, for his safety he travelled in the company of American Fur Company employees. DeSmet baptized many Native Americans during his years in the West. There is a famous petroglyph depicting one of Father DeSmet’s baptismal ceremonies. Perhaps, this is how Enos met De Smet.

John Enos knew of Charles Bonniville’s explorations in 1832 in Fremont County, and he acted as a scout for John Fremont during his explorations in the West into the Great Basin and on into California and the Sierras in 1842. His descendants have a family heirloom of a U.S. flag from John Fremont’s expedition.

In the 1860s, Enos knew John Bozeman and acted as a guide along the Bozeman Trail that connected the Oregon Trail to the southern Montana gold fields. He also knew Jeremiah Johnson, the famous mountain man.

Enos acted as a scout during Bates Battle, a skirmish between Arapaho, US soldiers and their Shoshone scouts in July of 1874 in the area around Nowood Creek and Bridger Creek.

In 1876, Captain Reno asked John Enos to act as a scout for General Custer before the Battle of Little Bighorn, but after Enos asked how many soldiers Custer had under his command Enos refused. He knew Custer would be greatly outnumbered, and it would be a losing cause. Custer’s 200 men were overwhelmed by thousands of Native American warriors in about an hour.

John Enos and his wife Julia were the parents of 12 children. He became a patriarch of a large extended family and left many descendants on the reservation and in Fremont County. One of his grandchildren reported he did a sweat lodge and took a dip in the Big Wind River even in the winter when icicles would form in his hair. In his later years, he served as a policeman on the reservation and ran the Shoshone hot spring. As an old man he made his home with his daughter, Phylisete and son in law, Edmo St Clair and was frequently photographed with a Hudson Bay blanket wrapped around himself.

He was a noted hunter and trapper, and he was hunting elk above Brook’s Lake with his family the day before he died, October 6, 1915. He was buried in a place of honor next to Chief Washakie, his cousin and lifelong friend in Washakie Cemetery above Fort Washakie. He was about 105 when he died.