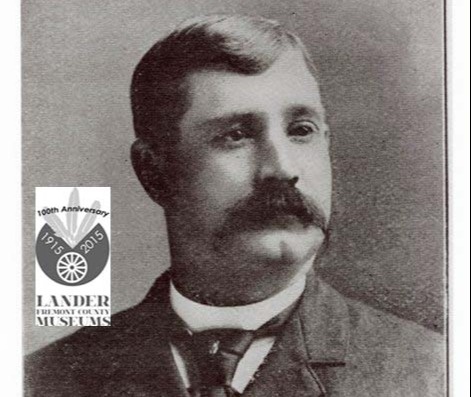 Atkins was originally born in Wisconsin in 1853, but by 1877, he had settled in Fremont county on land near Willow Creek. He also ran a livery and was part owner of a saloon. He traded shares in oil stocks and amassed a large interest in oil claims. He also dabbled in the cattle industry and owned a ranch along the Wind River close to Dubois, which he later sold to J.K. Moore for $13,000 dollars in 1898.

J.J. Atkins was the first sheriff of Fremont County to serve a full two-year term. In 1884, the newly created Fremont County covered the land from Sweetwater County in the south all the way up to the Montana boundary. It was a huge territory to police. Atkins took up his office on January 5, 1885, and within five days two of his prisoners made a clean escape from his jail. His jail is still standing on 4th street in Lander and has been converted to a family home. His prisoners were J.J.B.Holloway and Richard Watson. They had been arrested for robbery. They were never apprehended after their escape. Later, the third prisoner, Frank Howard walked away from the jail. He had originally been charged with manslaughter, but when the grand jury returned a murder indictment instead of manslaughter he escaped on September 28, 1886.

Atkins married Margaret Boyd, the daughter of William Boyd in 1880. She died 11 years later after a long illness following surgery. After his father-in-law’s death, Atkins was appointed guardian of Boyd’s two minor children.

Atkins also served the county when he was later elected to be the county assessor in 1903.

After leaving office he became interested in gold claims around Atlantic City and Lewiston. He owned the Blue Bird claim and was part owner of the Good Hope Mining company. Atkins also had an interest in a gold mine called The Rose.He sold The Rose to a capitalist for $50,000.

As he got older Atkins bought a store that sold candy, magazines, and cigars on Lander’s Main Street.

Time was not kind to Atkins, in 1922 he spent a night in the county jail before being taken to the State Home for the Feeble-Minded in Evanston. He was probably the victim of dementia or possibly several strokes. It was a sad ending for one of Fremont County’s early pioneers.

July 9, 9-2 pm at the Dubois Museum, “Geology of Torrey Canyon” By Matthew Bruseke

July 15, 7 pm at the Pioneer Museum, “Lester Hunt: The Wyoming Governor, From Lander” By Charlotte Dehnert

July 17, Noon at the Dubois Museum, “From Soldiers to Rangers: The Unique Assignment in Yellowstone National Park” By Brandon Lewis