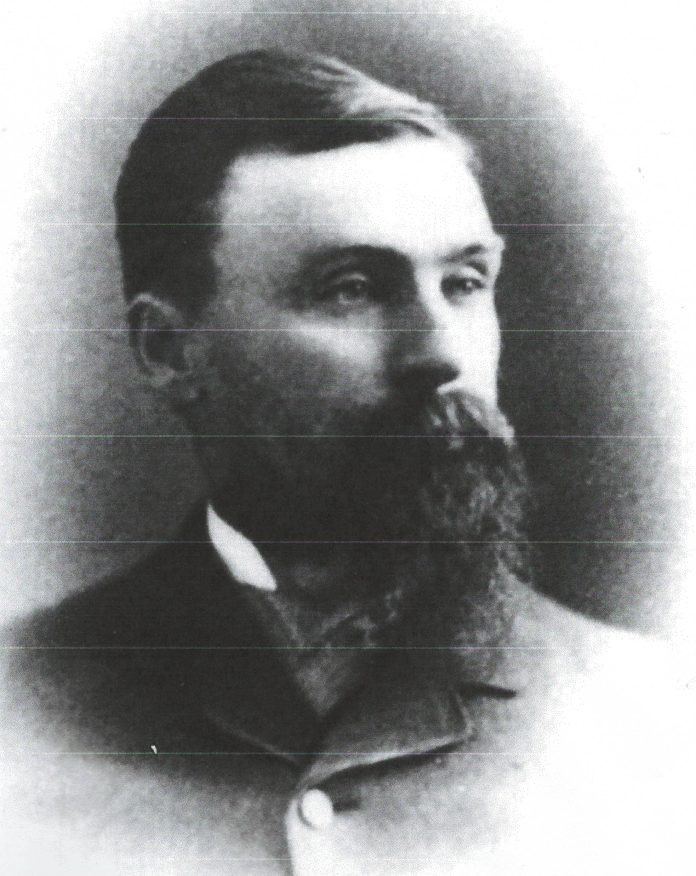 A shoe salesman, a soldier, a gold miner, a teacher, a postmaster, a legislator, an Indian agent, a farmer, a druggist, and a fossil hunter, these are a few of the hats that James Patten wore in his lifetime. He spent his adult life in the Wind River Basin and the Bighorn Basin. He was one of the early pioneers who documented Wyoming’s history.

James Patten was born in Hennepin, Ohio in 1840, and he became an orphan in his early teens when both his parents died in an epidemic. He lived with his sister for a time and then boarded with an elderly gentleman before moving to Chicago and working in a shoe store, then he enlisted in the Union Army and served for six months.

Two years after his return from the Civil War, he decided to move West and seek his fortune in Colorado mining for gold. A year later, Patten moved to Cheyenne as the Transcontinental Railroad was being built. After another year, he settled in Laramie where he opened a drug and candy store. While in Laramie he married a widow, Clara Haynes.  Patton was studying for the ministry when a teaching opportunity opened up on the reservation. He applied for the job and was accepted.

During his time as a school teacher on the reservation, word arrived at the agency about an attack by Native Americans on two settlers at the site of the old Camp Brown where Lander is now. Patten and his wife were part of the rescue party sent to retrieve the bodies of the settlers, Mrs. Richard and Mrs. Hall.

In the Fall of 1874, Washakie was taking the tribe on a buffalo hunt. The whole tribe including the children would accompany the hunters, so Patten would have no students to teach and would not draw a salary while the children were gone, so Patten proposed he accompany the tribe on the hunt and conduct classes during the hunt. His proposal was accepted, and he accompanied the tribe and wrote about one of the last tribal buffalo hunts. When Patten returned to the agency his salary was cut so severely he was unable to continue working as a school teacher, so he moved to what is today Lander and was appointed the first postmaster of the newly renamed town of Lander. He also took up farming on the south side of Lander. The Patten addition in Lander was part of his farm.  When the train finally came to Lander in 1906, one of Patten’s buildings had to be moved to make room for the train turntable, since Lander was the end of the line.

In 1877, Patten was appointed to be the Indian Agent on the Shoshone Reservation. He held that position for about two years. During his tenure as an agent, the Arapaho were placed on the Shoshone Reservation. Patten objected to the placement since the two tribes were historical enemies. Even though there were more people to feed on the reservation, the government food allotment did not increase, so times were very hard. Also during this time, the government restricted the sale of ammunition to Native Americans, thus making it even harder for the Shoshone and Arapaho to hunt for their own food. Patten also met Sacagawea and identified her as the girl who accompanied the Lewis and Clark expedition.

After his time as an Indian Agent, Patten returned to Lander and opened the Lander Drug Store in 1882. Patten ran for the state legislature and won in 1887. He served one term.  He partnered with Isaac Sullivan in his pharmacy. Sullivan was the pharmacist shot and killed by Dr. Schulke in 1890 in a dispute over a prescription. Soon after, Patten published a notice in the Clipper, the local newspaper, announcing he was now the sole owner of Lander Drug having bought out Sullivan’s widow.

The Lander Drug Store was foreclosed on in 1897, and Patten moved his family to the Bighorn Basin first settling in Bonanza, then Meeteesee, and finally, Basin where he continued his career as a pharmacist providing necessary drugs to the local population. He also served as Basin’s second postmaster until 1905.

Patten died in December of 1934 and is buried in Basin. His obituary noted he discovered a large deposit of brontosaurus bones close to Shell Canyon and brought them to the attention of the American Museum of Natural History.

Patten was an early member of the Pioneer Association. His writings documented much of the early history of the Wind River Basin. Historians owe him a tremendous debt.