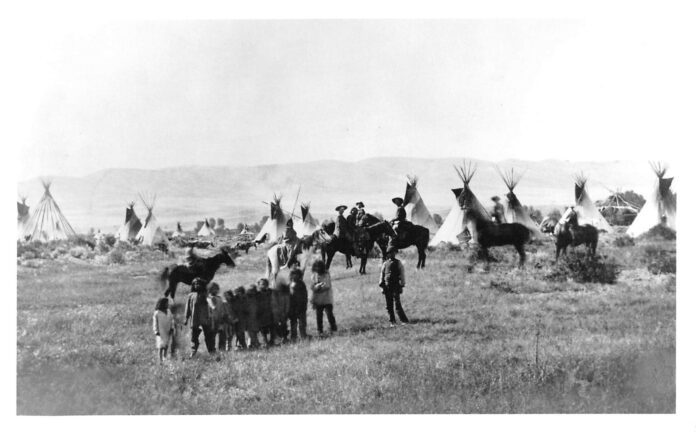 The Shoshone Indians have the longest prehistory in the Wind River Basin and largely controlled most of what is now Western Wyoming.  They were the first of the northern tribes to secure horses from the Spanish and southwest traders, giving them an advantage over other tribes.  As other tribes such as the Blackfeet acquired horses, the Shoshones’ dominance of the area faded.  Historical records from the 1800’s noted additional tribes such as the Crow, Cheyenne, Arapaho, and Lakota in the Wind River Basin.  However, in the 1820s, the Shoshone began to regain control of the area by trading for firearms at the Rocky Mountain Rendezvous.

In the 1860’s, the U.S. Government began to regulate the movement of the Shoshone tribe.  In 1863, at the first treaty of Ft. Bridger, rough boundaries for the Shoshone territory were set.  The treaty allowed the Eastern Shoshone a territory of about 44,672,000 acres, covering parts of the states of Utah, Montana, Wyoming, and Colorado.

When gold was discovered in the South Pass area in 1867, U.S. Indian Agents hoped to limit raids on mining camps by placing Native Americans on reservations.  Chief Washakie preferred the Wind River Basin so the government created a permanent reservation there for the Shoshone Indians.  The Shoshone Indian Reservation was established by an agreement between the Eastern Shoshone and the United States at the Fort Bridger Treaty Council of 1868.  The reservation, encompassing only around 3.2 million acres, was created “for the absolute and undisturbed use and occupation of the Shoshone Indians…”  The reservation ranged from South Pass across the Wind River Valley and over the Owl Creek Mountains.

The Gold Rush of 1859 caused an influx of non-native settlers into lands that were designated as the Arapaho and Cheyenne reservation under the Fort Laramie Treaty of 1851.  Later, the Northern Arapaho signed the Fort Laramie Treaty of 1868, giving them space to relocate in the Great Sioux Reservation, in present day western South Dakota.  However, the tribe did not want to permanently relocate to that area because the Sioux leaders belittled the Arapaho.  Not wanting to become culturally absorbed into the Lakota Nation, the Northern Arapaho continued to look for their own reservation.

In 1876, Chief Black Coal and the Northern Arapaho tribe sided with the U.S. Army to fight their former Cheyenne allies in the Dull Knife Fight.  As a result, the Army supported giving the Arapaho their own reservation in eastern Wyoming Territory.  However, this did not come to fruition.

As winter approached, Army officers looked to Chief Washakie and the Shoshone Reservation to distribute rations to the Northern Arapaho, despite the Fort Bridger Treaty Council of 1868, that designed the land specifically for the Eastern Shoshone.  This was supposedly a temporary placement, but became permanent because the government never took any further action to relocate the Northern Arapaho Tribe.  The government further solidified the Arapaho’s place on the Shoshone Reservation by including them in cession discussions, such as the sale of the Thermopolis Hot Springs.  Although the Shoshone protested their involvement, the Arapaho claimed that since they participated in the land cessions, they had claim to the lands.

In 1938, the US Supreme Court case, United States v. Shoshone Tribe of Indians, determined that the government had wrongly given Eastern Shoshone land and resources to the Northern Arapaho Tribe.  A subsequent land deal secured the Arapaho claim as half-owners of the Shoshone Indian Reservation, and the reservation was officially renamed the Wind River Reservation.

Before the Shoshone Reservation was renamed the Wind River Reservation in 1938, many changes took place to redefine the boundaries.  In 1887, the General Allotment Act, also known as the Dawes Act, allotted parcels of land to individual Native Americans and their families.  All remaining unassigned land was sold to the government and opened to non-native homesteaders.  The Act stated that the head of household could qualify for 160 acres of viable farming lands or 320 acres of grazing land.  Clear title for the land and immediate U.S. citizenship would be given to the property owner after 25 years.

In 1905, under the McLaughlin Agreement, the tribes were encouraged to cede nearly 1.5 million acres of their land holdings north of the Big Wind River for up-front cash payments and the promise of future revenue to pay for an irrigation system, water rights, and schools.  Although this deal should have brought the tribes more than $2.2 million in revenue, reports indicate they only received around $500,000 in payments.  In August of 1906, the lands north of the Wind River were opened for settlement to non-tribal members.  These are the lands on which the town of Riverton was built.

In 2014, the question was posed as to whether or not Riverton was located on the Wind River Reservation, being that it is surrounded on all sides by tribal lands.  In 2017, the 10th Circuit Court ruled that Riverton is not on the reservation because the land was ceded in 1905 by an Act of Congress.

BTI is hiring – Drive for the best and be home every night!