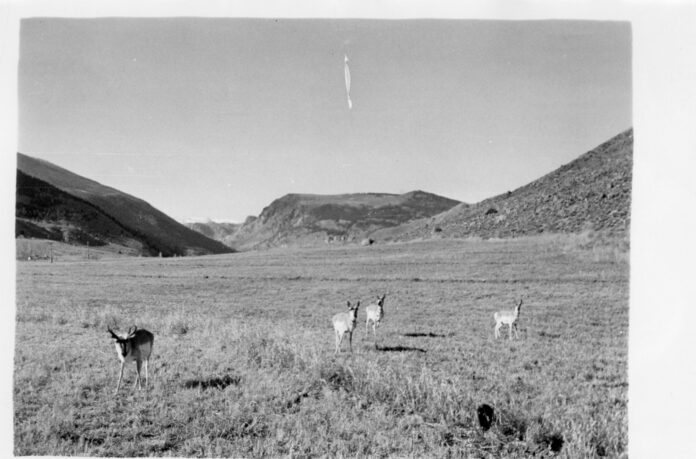 For the next few weeks, a recently discovered comet, C/2022 E3 (ZTF), is traversing the skies about Earth, appearing as a green smudge through binoculars. The last time the comet visited was 50,000 years ago, above a world both very different and very similar to the one we experience today.

While the comet passed in the middle of the last Ice Age, temperatures were rather mild. The Wind River Range and Yellowstone area were covered in glaciers, but the lower elevations may have been thawed out in the period. Geologically, much of the lower elevations in Fremont Count were the same then as they are today, only the mountains above being carved deeper by the glaciers covering them. A wide variety of large mammals roamed Wyoming throughout the last Ice Age. Natural Trap Cave, near Lovell, has a small, easily hidden opening at the top of it and an 85-foot drop to the bottom, meaning any animal that fell in would be killed instantly. Many of the mammals that fell into the cave and likely lived in Fremont County are familiar to us today, including weasels, martens, and wolverines alongside bigger animals like pronghorn antelope, deer, bighorn sheep, and bison. However, several mammals that no longer natively exist in North America, like musk oxen and horses, wandered the area through the Ice Age.

Many of the animals that walked Fremont County under the comet, however, are unfamiliar today. Species of camels, bigger than those living today, grazed on leaves, small plants, fruit, and grass. Dire wolves, with powerful jaws, hunted and scavenged alongside grey wolves and coyotes. Also hunting throughout the region were American lions, perhaps in smaller groups than modern African lions and with smaller manes. American cheetahs, evolved from the same ancestor as cougars, sped around the landscape in a similar way to modern cheetahs. The giant short-faced bear walked on long legs, and while less heavily built than today’s bears, it dwarfed grizzly bears by over a foot with a feline face, teeth
made for eating meat. One of several mammoth species also traversed the County area, potentially the world’s largest, the Columbian mammoth, whose shoulders rose to 12 feet high and whose tusks extended up to 13 feet long, covered in only a thin layer of hair.

Next up for the Fremont County Museum:

December 2022-October 2023 at the Pioneer Museum, “Wind River Memories: Artists
of the Lander Valley and Beyond” art exhibition

The Wind River Cultural Centers Foundation has been created to specifically benefit
The Dubois Museum, the Pioneer Museum in Lander and the Riverton Museum.  The
WRCCF will help deliver the long term financial support our museums need to flourish.
In the current economic environment, the museums are more reliant than ever on
donations from the private sector to continue to provide the quality programs, collections
management, exhibits and services that have become their hallmark over the last four
years.  Please make your tax deductible contribution to be used specifically for the
benefit of the museum of your choosing by sending a check to Wind River Cultural
Centers Foundation at PO Box 1863 Lander, WY 82520 or taking it directly to the
museum you choose to support.