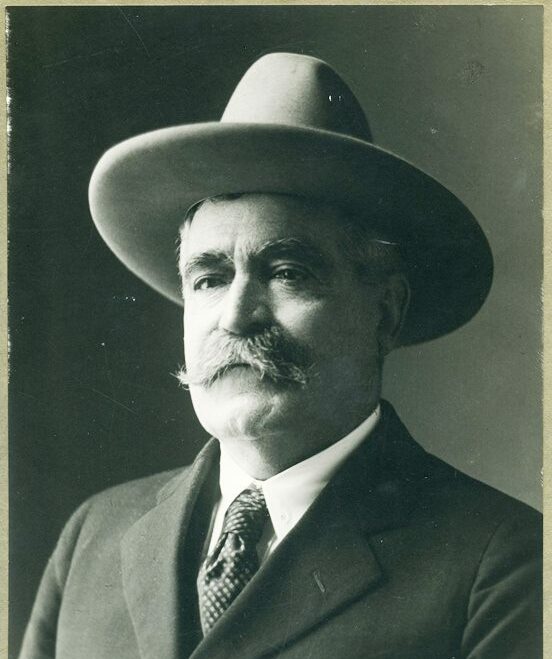 Edward J. Farlow and his friend, Bill Frakes came to Wyoming from Iowa as a 17 year old boys by hoboing on the Union Pacific trains in April 1878. The boys arrived in Laramie hungry and broke but soon found work on ranches until the next spring when they made their way to Green River. There the gold fever bug hit them, and they rode a stage to Miner’s Delight.  Their dreams of easy riches in the gold fields were soon dashed, so the boys found work on cattle ranches around Beaver creek.  That fall with their seasonal wages in their pockets they walked to Rawlins and rode the rails back to Iowa for a visit.

The next spring Ed outfitted a wagon and spent 40 days covering 1000 miles to return to Wyoming. Ed Farlow’s brother, Nelson joined him on this adventure. They found work punching cattle for Robert Hall, and in the fall Ed and Nelson pooled their wages and purchased 100 heifers from Robert Hall for 11 dollars a head. Ed would be in the livestock industry for the next 65 years. The Farlow brothers took heavy losses in the winter of 1882 to 1883 when blizzards hit and killed most of their cattle. Ed then signed on with Jules Lamoureaux, another early pioneer, to herd horses and keep waterholes open in the winter on Beaver Creek.  He lived through a rough winter with only a cold, damp dug out for shelter.

In September of 1883, he won the hand of Lizzie Lamoureaux, his boss’s half Sioux daughter.  In order to raise funds to build the Catholic church, a contest was held in Lander to find the most popular girl in town.  Lizzie Lamoureaux won the contest even though she was the niece of the Sioux War Chief Gall who helped defeat Custer just 7 years before.

The Arapaho were placed on the Wind River reservation in 1878 about the same time Ed Farlow first arrived in Wyoming.  Farlow befriended the Arapahos and learned their language and Indian sign language.  Farlow was also a friend of Chief Washakie and was also a frequent guest in the old chief’s lodge.  Washakie consulted with Farlow when he negotiated with the U.S. government, because Washakie considered Farlow a trusted friend.  Lizzie and Ed Farlow kept a well-equipped tipi up on their lawn to accommodate Native American visitors who frequented their home. Lizzie’s father gave the couple rural land on what is now the north side of Lander as a dowry. They built a home on this property that still sits on Washakie street at an angle to the street.

Lizzie and Ed became the parents of two sons Albert “Stub” Farlow and Jules Farlow.  Stub Farlow became a renowned rodeo cowboy, and the Farlows started the first paid Wyoming rodeo and Wild West Show in 1894. Frontier Days in Cheyenne claims to be the “daddy of ‘em all” but Lander can claim to be the “granddaddy of them all,” because of the Farlows. The rodeo arena was originally in the 200 block of Main Street, but later moved to the arena we know today.  Farlow owned the rodeo arena for 25 years and directed many rodeos and wild west shows there.  Farlow’s friendship with the Native Americans helped make his Wild West Shows very authentic with Indian horse races and wolf dancers as part of the show.

The skull of Harvey Morgan with a queen pin hammer still embedded in it was dug up in the yard of one of the properties owned by Ed Farlow in 1907 when water lines were being installed in town. The property had been built on top of the old cemetery close to Camp Auger/Brown, the original military camp that started the town of Lander. Most of the bodies had been moved, but Harvey’s body had been overlooked.  Harvey’s skull became the first artifact in the Pioneer Museum collection. Farlow was active in the original Pioneer Association and hosted pioneer picnics in his yard which at the time was outside of town.

As early as 1913, Farlow took Native American friends on expeditions to perform

Wild West shows in Denver, Casper and Fort Collins.  Two of his performers were Broken Horn, an Arapaho man and his wife.  Broken Horn’s wife was a White woman who had been kidnapped by Cheyenne as an infant in a raid on a stage station in Nebraska.  She had lived her whole life as a Native American woman and chose to stay with her Arapaho husband when her sister found out about her and came to retrieve her.

Farlow also helped Tim McCoy, a silent movie star, arrange for Native Americans to perform in the silent movie, The Covered Wagon filmed in western Utah. The movie studio originally requested 400 Native Americans.  Farlow was able to recruit 100 Shoshone and Arapaho from the Wind River Reservation and Bannock from Fort Hall to work on the movie. Farlow escorted his troupe of performers on a tour to Europe to promote the movie. The Native Americans were originally reluctant to travel so far from home, but eventually Chief Goes-In-The-Lodge and his wife agreed to go and 25 others agreed to go, including some children.

Goes-In-The-Lodge was fascinated with the subway in New York City and commented, “Waugh, all the same prairie dog, go down in one hole and go a long way and come up out of another” –a pretty good description of a subway.  While in New York, Farlow’s troupe camped in Central Park.

For 25 weeks Farlow’s troupe performed at Piccadilly Circus in London and then went on to Paris to promote The Covered Wagon. They were unimpressed with the Eiffel tower thinking it would soon fall down. Farlow took Harvey Morgan’s skull with him to Europe to promote the movie.

Farlow was involved in several other silent movies in the 1920s such as: War Paint, Winning of the Wilderness, and Wyoming.  In 1927, the movie Wyoming was filmed close to the old Block House near Fort Washakie.

Farlow helped his Native American friends in other ways besides the film industry.  He taught some of them to shear sheep using his own sheep to train them and then found them employment on other sheep outfits.  He also found them employment working on the railroad when tracks were being laid into Lander.

He died in April of 1951, after in many ways helping to mold the State of Wyoming into the Cowboy State we know today.