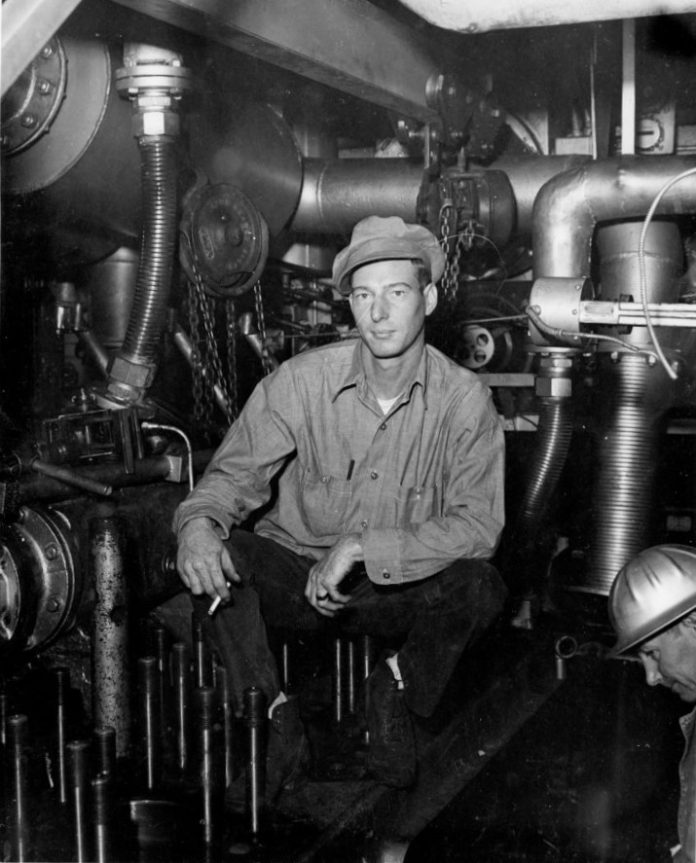 Earl enlisted in the Navy on September 5th, 1942, and was promptly sent off to the Great Lakes Naval Training Center near Chicago, the largest training center in the U.S. In letters home to his foster family Neil, Reva, and younger brother Jerry, Earl discusses life at the training center; drilling, busy days without free time, and numerous vaccinations. He complains about small meals, not getting enough mail, and often asks about family, friends, and life in Dubois. On September 15, he notes “We got presented with a new radio today for being one of the best companies in the camp but we can only play it in our leisure hour in the evening.” Earls’ letters home, donated to the Dubois Museum by his brother Jerry, serve as an account of what happened to a young cowboy from a remote Wyoming village who went off to serve in the Navy. Earl shares a common sentiment displayed by many servicemen, “These are terrible letters I know, but that’s all we can do is say little and ask a lot.”  Earl suffered from post-traumatic stress disorder, called combat fatigue during WWII, from confinement to the sea and experiencing the realities of war.

After a brief nine-day leave from training, Earl and other company members were sent back to the Great Lakes Naval Training Center for a few days to pack and prepare to be transferred to San Diego. According to Earl’s letter from October 21, 1942, to his family, “We got a hotel room first then went to the service men’s center. There is a show going on all the time, a dance on three floors every night, more good-looking girls than you can shake a stick at. The Hoosier Hot Shots put their program on the night we were there. I enjoyed it very much. We saw several of the boys from our company there. Servicemen ride the buses and streetcars free in Chicago. We went all over the place, rode the elevated railways there, and got quite a kick out of that. Things sure aren’t the same down here like they were here, blackouts all the time. But most of all I sure enjoyed my four days at home, it sure was swell.” During leave, Earl only had four days to spend with family and friends since leave does not account for the time he spent traveling home to Dubois.

After Earl arrived in San Diego, he was relieved to find out that the food was much better than at the Great Lakes Naval Training Center. Earl was assigned duty aboard the USS Teak and served for four years throughout WWII in the Pacific Ocean theater. The USS Teak is an Aloe-class net laying ship, designed to lay submarine and torpedo nets. The Teak was being constructed just two years before Earl enlisted, and was commissioned in December of 1942. The Teak provided coastal protection services, patrolling and maintaining anti-submarine nets in the San Francisco Bay. In 1944, the Teak was reclassified as a net laying ship and set out for operations in the South Pacific Ocean, seeing assignments near New Guinea and the Philippines where she laid net moorings, sonar and marker buoys, made tows and carried cargos.

In 1947, Earl married Opal Nicklin, a divorcee with four children. The family lived a typical navy family life, moving around from port to port and seeing duty in the Philippine Islands and Japan.  After WWII, Earl served in the Korean War on the LST 846, a tank landing ship that performed cargo runs, transporting men and equipment. Tragically, while serving his country as an advisor to the Navy Reserve in Ogden, Utah, Earl died in 1957 at age 36 and was buried in Lander, Wyoming. Opal and the children moved to California and after a few letters to Neil and Reva, were never heard from again by Earl’s family.

April 6, 7 pm at the Riverton Museum, “The History of Photography & Cameras” by Ken Stoeklin

The Dubois Museum, the Pioneer Museum in Lander and the Riverton Museum need your financial support.  In the current economic environment, the museums are more reliant than ever on donations from the private sector to continue to provide the quality programs, collections management, exhibits and services that have become their hallmark over the last four years.  Please make your tax-deductible contribution to be used specifically for the benefit of the museum of your choosing by sending a check to Fremont County Museums 450 N 2nd Rm 320 or taking it directly to the museum you choose to support.