#Lookback: Earl Osbon and the Yorks 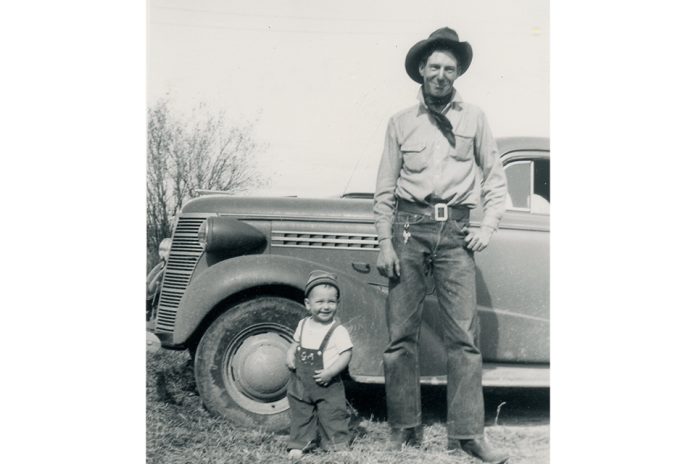 Earl Ozel Osbon was born in Arkansas on April 19th of 1921 and somehow found his way to Lander in the early 1930s. At the young age of 12, he was found working for meals and sleeping in a cow barn at a ranch near Lander. Reva and Neil York unofficially adopted Earl and paid the rancher $50 to take custody of the boy. The Yorks were childless at the time and wanted to raise him as their own. Despite their meager means, the Yorks provided care, love, and good food. Shortly after adopting Earl, the family was hired at the Torrey Lake Ranch in Dubois in 1934 where they remained until 1940. Earl had received no education until he was adopted by the Yorks. Reva, a licensed teacher, homeschooled Earl and was able to educate him from illiteracy to an eighth-grade diploma in just four years.

After a short residency in California where Reva and Neil had their son Jerry, they returned to Dubois in early 1941 where Neil and Earl worked at local ranches. Earl worked as a cowboy on both the Double Diamond and Trail Lake ranches, while Neil worked at the Mockler’s place. After working on the Double Diamond Ranch near Dubois for a summer, Earl accepted a 33 caliber 1886 Winchester rifle as partial payment of wages. He made a scabbard for his prized rifle out of cowhide and carried the rifle on his saddle for the remainder of his years as a cowboy. When Earl enlisted in the Navy, he left the rifle with his foster father, who then passed it to his son Jerry. Jerry occasionally used the rifle for hunting, the last time in 2009, harvesting a bull moose only a mile or so from the old Double Diamond ranch. Jerry fondly remembered his foster brother and admired his hard work and dedication to his country.

Neil York was born in Provo, Utah in 1899. Around 1902 his family moved to Lander and homesteaded part of the area now called Deadman’s Gulch. He was educated to the 8th grade and spent his life working Fremont County area ranches and farms. Reva Helen (Richardson) York was born in Crookston, Nebraska in 1906. Her family moved to Lander with the coming of the railroad, as her father worked as the track maintenance foreman for the Riverton-Lander spur for many years. Reva graduated from high school in Lander in 1926 and obtained a teaching certificate the next year. She taught one year at a ranch near Burris and then married Neil in 1927 in Arapaho.