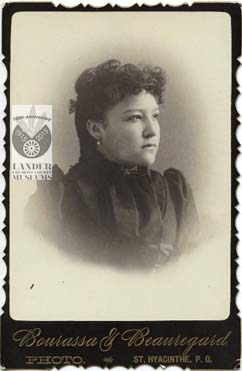 Dora Robertson was one of the true pioneers of Lander.  Her parents, Jules and Elizabeth (Woman Dress) Lamoureaux came to Lander on April 1, 1874 from Atlantic City in a wagon drawn by an ox team. That night during a storm, the family took refuge in a barn close to where Main Street crosses the river, and Dora was born that night in the barn.  Her mother, Elizabeth or Woman Dress, her Sioux name, was the sister of Sioux War Chief Gall.  Her uncle, Gall, helped to defeat Custer at the Battle of Little Bighorn.

When she was 19, Dora kept company with a handsome young man known as George Cassidy. Dora was a beautiful young woman and had many suitors.  She remembered attending many dances with George (Butch) Cassidy.  Dora said, Butch was always a perfect gentleman, and he always had fine horses for her to ride. Dora says she met Cassidy at a dance at Coulter House in Lander, and he asked her to go riding the next day.   They rode to the North Fork of the Popo Agie and back.  She rode the side saddle the whole way as was the custom for young women. Two other young local women, Mary Boyd and Alice Stagner also socialized with Butch before he became an infamous outlaw.

Dora went riding many times with Cassidy.  “He had to leave one day and that was the last I saw of him till he returned to Lander in the 1930s.”  Dora met and talked to Cassidy at Baldwin’s store in the 1930s. “There were several there that talked to him and recognized him.”

In 1896, Dora married John Dollard, and her father gave the couple 80 acres of land in what is today Lander for a wedding present.  Jules Lamoraux gave all his daughters land as a dowry when they married.   Dora lived on that land the rest of her life.  John and Dora had two children, Irene and Arthur. That union ended in divorce.

Dora married W.A. (Bill) Robertson on June 6, 1909. He was a flockmaster, and she spent many years with her husband at various sheep camps.  According to Dora, “Once when the flock was on Beaver rim, a treacherous snow storm struck in the night.  The sheep moved off the bed-ground and drifted with the strong winds.   Approximately, 2000 head (of sheep) piled up two and three deep in a gulch and either smothered or frozen to death.   Bill hired Indians to skin the pelts to salvage what he could.”  Bill and Dora were married for 56 years before she became a widow in 1965. Dora died at age 95 in 1970 at Bishop Randall Hospital.  She spent all of her life in Lander except for two years when she attended a convent school in Montreal, Canada where her father had come from where she learned to speak French and learned to paint.

Thru October 2022, 9-5pm Monday-Saturday, at the Pioneer Museum, “Hurrah for The Cowboy: Men of the Open Range” Art Exhibition

The Dubois Museum, the Pioneer Museum in Lander and the Riverton Museum need your financial support.  In the current economic environment, the museums are more reliant than ever on donations from the private sector to continue to provide the quality programs, collections management, exhibits and services that have become their hallmark over the last four years.  Please make your tax deductible contribution to be used specifically for the benefit of the museum of your choosing by sending a check to Fremont County Museums 450 N 2nd Rm 320 or taking it directly to the museum you choose to support.