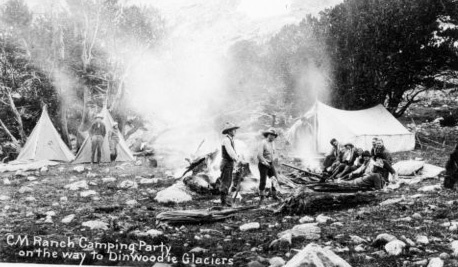 The CM Ranch was homesteaded in 1909 and acquired by Charles Moore in 1920. Charles had grown up at Fort Washakie surrounded by soldiers, Native Americans, cowboys, cattlemen, hunters and trappers, freighters, and outlaws; he learned the arts of survival on the frontier and became an ardent hunter and trapper himself. Charles attended secondary schools on the East coast, then rode as a cowboy and bronc buster in Buffalo Bill’s Wild West Show before finally graduating law school. However, life as a lawyer did not suit him, so Charles opened a boys’ camp in 1906 which led pack trips through Yellowstone Park. The enthusiasm of the boys led to the creation of the CM Dude Ranch which was meant to provide living quarters for the families of the boys who wanted to come to see the West for themselves.

In 1920, Moore purchased some land to begin the CM Ranch. He built a few cabins, a kitchen, and a hydroelectric plant and raised dairy cattle, chickens, and vegetables. Although he continued to lead pack trips into Yellowstone, Moore eventually stopped due to an ever-increasing demand for “dude ranching”. Successful dude ranches at the time needed to have western influences to provide wilderness expertise, but enough eastern influence to lure guests to the West. Charles Moore had both.

Moore became one of the most active Wyoming dude ranchers and was eventually elected president of the Dude Ranchers’ Association. In 1931 he was elected to the state legislature where he heavily promoted legislation favorable to the dude ranching industry. During this time, Moore continued expanding his operation. In 1931 he purchased the Simpson Lake Camp. Built as a hunting camp in 1928, the Simpson Lake Camp, originally called Three Waters Hunting and Fishing Camp was located 13 miles from the CM Ranch. At this time, Moore was catering to the social elite of New York, Boston, and Philadelphia, hosting names like Ingersoll, Biddle, Morgan, and Roosevelt. As these dudes learned to ride, Moore would schedule trips for them to ride to the Simpson Lake Cabins where they could stay for as long as they wished, living the life of a cowboy.

Wyoming has always been a stronghold of the dude ranching industry, and for over seventy years, the CM Ranch and the Simpson Lake Cabins have made it possible for hundreds of people to experience the wilderness and the American West in ways they never forgot.

March 3th, 6 pm at the Riverton Museum “Women in Wyoming” by Linsey Linton (via Zoom)