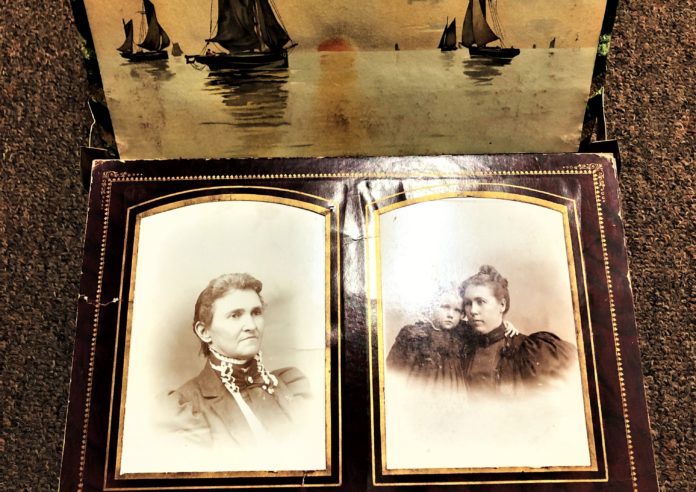 Popular during the late nineteenth and early twentieth centuries, the cabinet card introduced portrait photography to a wider audience. These decorative examples of large, collectible photographs could be described as the original Instagram.

Early portrait photographs, called a “carte-de-visite” were small photographs mounted on a piece of stiff paper the size of a calling card – hence the name. They were invented by French photographer Andre Adolphe Eugene Dideri who devised a way to cheaply produce many prints by taking several portraits on a single plate. The first carte de visite was taken in May, 1860 of Queen Victoria, Prince Albert, and their children. It was instantly popular and people began to collect small, affordable, portraits of their friends, family, and international celebrities. The demand for carte de visites peaked in 1860, but they continued to be produced into the early 20thcentury.

The carte de visite decreased in popularity as the cabinet card’s popularity grew. Cabinet cards, first introduced in the 1860s, were essentially larger versions of their predecessor. These photographs were mounted on thicker, sometimes colored, cardboard, and the name of the photographer was embossed on the front. The back of the mount was often decorated with stylized, embossed scrolling and decorations. Cabinet cards declined in popularity around the turn of the twentieth century, when photographic postcards were introduced, but they continued to be produced until the start of World War I.

Cabinet cards are relatively ubiquitous in museums, antique shops, and personal collections. They are easily identifiable because they were standardized in size and measure 6.5×4.25 inches. They were collected and often stored in elaborate albums, like the velvet one shown here. Cabinet card albums like these would have been placed on a small table made especially for the album and were a prized possession to show-off to visitors.

July3, 9:30am at the Riverton Museum,“1838 Rendezvous Site Adventure Trek”

The Dubois Museum, the Pioneer Museum in Lander and the Riverton Museum need your financial support.In the current economic environment, the museums are more reliant than ever on donations from the private sector to continue to provide the quality programs, collections management, exhibits and services that have become their hallmark over the last four years.Please make your tax deductible contribution to be used specifically for the benefit of the museum of your choosing by sending a check to Fremont County Museums 450 N 2ndRm 320 or taking it directly to the museum you choose to support.