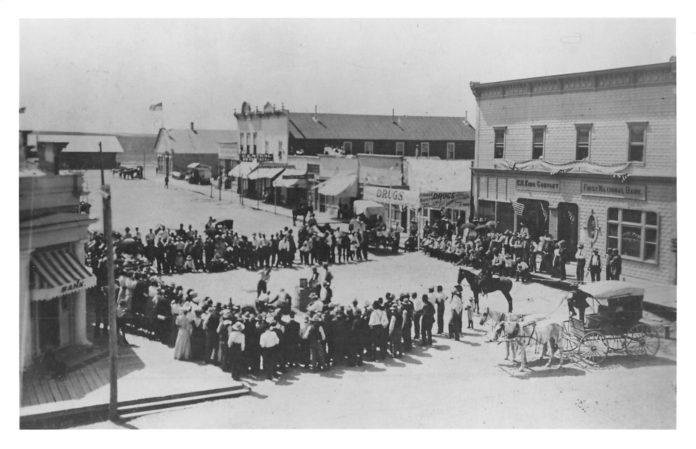 Charles Henry King was born in Perry Township, Pennsylvania, on March 12, 1853, to Lynch King and Rebecca Shepherd. King married Martha Alicia Porter and had five children with her that lived to adulthood. One of his sons, Leslie Lynch King, was the father of former President Gerald R. Ford. Gerald R. Ford was born Leslie Lynch King Jr. on July 13th, 1913. The former President later changed his name to Gerald Rudolff Ford Jr. when his mother was remarried to his stepfather.

In the 1880s, King started his business setting up stores, banks, and freighting operations along the Fremont, Elkhorn, and Missouri Valley Railroad. The company was named the C.H. King and Company. In 1884, King and his children moved from Chicago to Chadron, Nebraska, where he established a thriving mercantile business. While managing the store in Chadron, King made plans to establish a store in Fort Fetterman in Wyoming. Over the next 20 years, he moved around Wyoming establishing businesses in Fort Fetterman, then Douglas, then Casper, and finally Shoshoni.

C.H. King and his family moved to Casper from Omaha, Nebraska, and were one of the earliest settlers in the town of Casper. King was a prosperous entrepreneur and established one of the first banks and a dry goods store in Casper. After opening his businesses in Casper, C.H. King followed the railroad onto Shoshoni.

After the town of Riverton was settled, the population of Shoshoni decreased because the mining in Copper Mountain had begun to dry up. In March of 1908, a fire devastated Main Street in Shoshoni. Luckily for C.H. King, the fire destroyed the buildings on the opposite side of the street. After the fire, the C.H. King building became the oldest commercial building to remain in the town of Shoshoni.

On July 15, 1919, C.H. King sold the building to William C. Smart.Mr. Smart and his business partner, Ralph Linn, opened a grocery store in the building. In 1926, Smart bought out Linn’s interest in the company and continued to operate the grocery store on his own. During the depression, Smart lost the property to Fremont County because he could not pay his property taxes. The Wind River Masonic Lodge # 25 bought the building for back taxes in the same year. The Masons established their meeting place on the top floor of the building. The Wind River Masonic Lodge #25 maintained ownership of the building until 1937.

July 8, 7 pm at the Dubois Museum, “Rising and Falling Mountains” By Matthew Bruseke

July 9, 9-2 pm at the Dubois Museum, “Geology of Torrey Canyon” By Matthew Bruseke