19 inches of ‘heavy snow’ recorded in the Winds 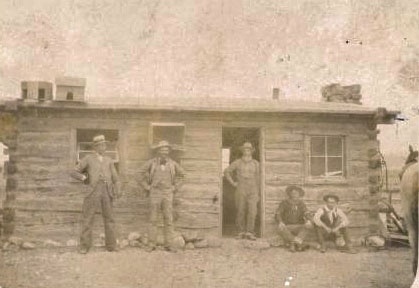 This photo, taken around 1889, supposedly shows Butch Cassidy and Al Hainer (both to the left of the doorway). Butch arrived in Fremont County, Wyoming, in 1889 and it was here that he met and formed a partnership with, a cowboy by the name of Al Hainer. Little is known of Hainer, and some believe that he may have been a fellow Mormon from Utah and that his name may have even been an alias.

Hainer and Butch likely settled on Horse Creek, north of Dubois. It is believed that they may have been working for the Embar Cattle Ranch, which was originally in that location. The pair stayed with Hughie Yeomans, one of Dubois’ first settlers, in the fall of 1889 and may have even helped Yeomans construct his cabin.

As a result of the Telluride, Colorado bank robbery, Cassidy was rumored to have quite a bit of money. It comes as no surprise then that one of Cassidy’s other friends in the Dubois area was Lander banker Eugene Amoretti Sr. and, according to Amoretti’s son, Cassidy reportedly deposited large sums of money in his Lander bank. It is also worth noting that Amoretti never had one of his banks robbed during Butch’s outlaw days.

Sometime in 1890 Butch and Hainer reportedly left Dubois for Johnson County, Wyoming. Although their stay was brief, stories of the outlaws’ time in town are numerous. A few of them are:

According to Mary Allison’s A Dubois Area History, Eugene Amoretti purchased property from Butch Cassidy and Al Hainer along Horse Creek in 1900. So far, no evidence of this transaction can be found. However, it was rumored that Cassidy would often pay off the mortgages of ranchers to make them allies. Is it possible that the supposed land transaction was really the two outlaws paying Amoretti’s mortgage as a way of winning his loyalty?

According to the Simpson family, Cassidy rode 120 miles round trip to the doctor at Fort Washakie during a blizzard in the winter of 1889 for medicine for their youngest child who was sick with influenza. However, some researchers have claimed the Simpson family did not yet have a child in 1889, let alone one who was sick from an influenza outbreak. Did Cassidy really make this heroic ride or was it someone else?

Andrew Manseau, an early homesteader in Dubois, claimed, “Butch Cassidy and Al Hainer spent one winter on a place above me. They had some racehorses and bought blue joint hay from me. I charged them big prices.” He also claimed that Buch spent a lot of time at the Meek’s Ranch “down the river” and that “Bub” Meeks eventually joined him, riding with him during bank robberies. Is it possible that Dubois had more than one outlaw in town?

May 5th, 6 pm at the Riverton Museum “Historic Preservation Efforts in Riverton”

May 13th, 7 pm at the Pioneer Museum “Wyoming Outlaws” By Ray Maple

May 14th-28th, 9-5 Daily at the Pioneer Museum “Abraham: Out of One, Many” Art Exhibit in the Western Gallery

May 14th, 10 am at the Pioneer Museum “Downtown Lander Historic Walking Tour”