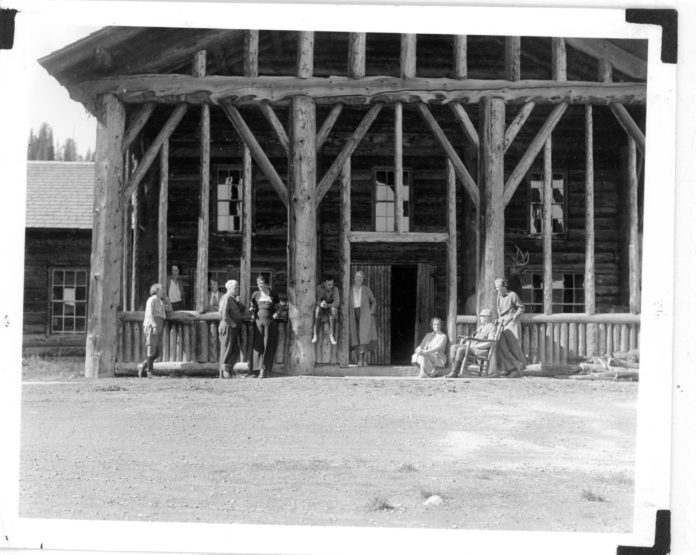 Located on the western edge of the Shoshone National Forest, about halfway between Dubois and Moran Junction, sits Brooks Lake Lodge. Built in 1922, Brooks Lake Lodge is an enduring symbol of the early recreation industry in Wyoming, especially in the Upper Wind River Valley.

Tourism and recreation have always been important factors in the economic development of Wyoming. Prior to the establishment of Wyoming Territory in 1868, wealthy east-coasters and Europeans were already traveling to the West, and Wyoming, on hunting and exploring expeditions. When Yellowstone National Park was established in March of 1872, it dramatically changed the image of tourism and recreation in the American West. Despite stagecoach wrecks, sudden storms, highway robbers, and hostile encounters with bands of Nez Perce and Bannocks, tourists continued to visit the park, increasing its popularity, and creating the self-named “Wonderland of America”.

The consequences of World War I and the subsequent national wave of nostalgia for early America, especially idealized versions of the Old West, along with increased access to automobile travel, meant middle-class tourists began to take to the roads in large numbers. Dubois, and other towns in the Wind River Valley, had earlier felt the impact of tourism – guiding hunters and entertaining would-be buckaroos on dude ranches. But businessmen in Dubois, Lander, and Jackson hoped to increase this wave of tourism by diverting Yellowstone’s traffic past their waiting communities and into Yellowstone’s new South Entrance. Tourists could be transported by bus from the railhead in Lander to Dubois, and then on to Jackson Hole and the Lake Hotel along a newly constructed road over Towgeetee Pass. The buses, operated by the Lander-Yellowstone Transportation Company founded in April 1922, were to cooperate with the Amoretti Hotel and Camp Company which was to build two hotels: one in Moran, and one at Brooks Lake.

Employing over 100 men, working nearly round the clock, Brooks Lake Lodge was completed in time for the Lander-Yellowstone Transportation Company’s inaugural ride, on July 1, 1922. The Lodge was widely written about in local newspapers and was extraordinarily popular in 1922 and 1923, but unfortunately, its success was short-lived. Tourists complained the bus ride from Lander to the Lodge took too much time, and the overnight stop at Brooks Lake Lodge was quickly discontinued.

The Dubois Museum, the Pioneer Museum in Lander and the Riverton Museum are seeing significantly decreased visitation this summer as a result of Covid-19. As a result, the self-generated revenue we rely so heavily on to make ends meet is not keeping pace. We are counting on private donations to continue to maintain successful and engaging museums during this time. We urge you to make a tax deductible contribution to be used specifically for the benefit of the museum of your choosing by sending a check to Fremont County Museums 450 N 2nd Rm 320 or taking it directly to the museum you choose to support.