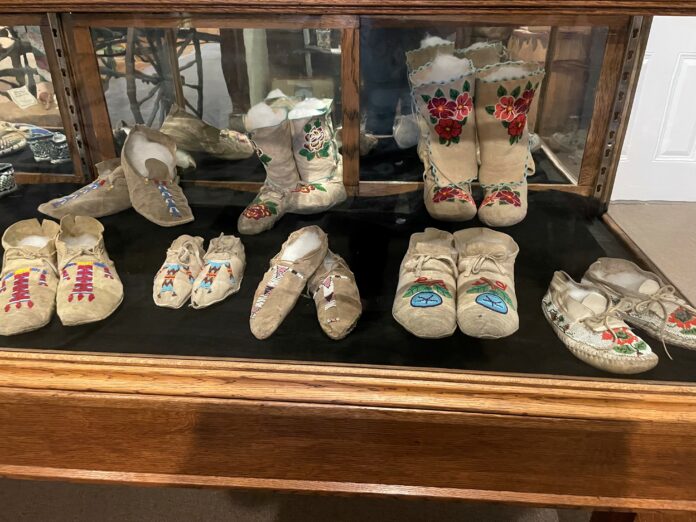 Beading is one of the most common crafts practiced by Native people across the country. Beads have been found all over the world with some of the oldest discovered beads dating back over 100,000 years ago. Beadwork was used to decorate clothing, tents, horse tack, and other common objects and was also used to tell stories, show accomplishments, and indicate status.

Traditional Native American beadwork used beads made of natural materials that could be gathered and drilled out or otherwise shaped and strung. Different locations and territories provided unique natural materials. Depending on where the tribe was at the time, they may have made beads out of shells, stones, semi-precious stones, teeth, ivory, wood, and seeds. However, as non-Native settlers encountered Native peoples, non-traditional beads were incorporated into the beadwork.

There are three main beading techniques used by Plains Indians. The first technique is netting which creates a mesh of beads. The first row of beads is created and then the succeeding rows are sewn to the previous row one bead at a time to create a network of interlocking beads. The method is also known as gourd stitch because it is often used for covering curved surfaces such as rattles.

The third beading technique is called weaving. This technique uses a simple loom to weave beaded threads through a set of plain threads using a needle. This creates a stand-alone band of beadwork that can be sewn onto a cloth backing and then attached to a shirt or other items. This technique is almost exclusively used to create geometric patterns.

Native American beading designs often appear to the untrained eye as decorative geometric patterns. However, they are abbreviations of pictorial designs. Over time, the Plains nations each developed their own distinctive beading styles. There was no overarching language of beading in the Plains region. Standard design elements could mean different things to different artists. Arapaho beading is strongly infused with the symbolism of animals, plants, nature, manmade objects, and abstract ideas.

Beading patterns may look like simple shapes, but each shape holds meaning. For example, an equilateral triangle with the point downward represents a heart, a long stripe crossed by two short lines is a dragonfly, and a row of small squares at specific intervals represents tracks. Arapaho beadwork can be both decorative and significant, depending upon the piece and the purpose. A single shape can be a decorative addition to a moccasin or bag, while a series of images placed together can be done in a way to tell a story. The shapes and patterns may represent significant events such as a successful hunt, a
personal experience, or a landscape. All beadwork is crafted with great skill and care, preserving the ways and culture of the Arapaho. Beading is taught from generation to generation, passing on the tradition of the craft, as well as the meaning of each shape and pattern.

Shoshone beading is often marked by the Shoshone Rose design. Since World War II, the rose has become one of the most dominant and most recognizable patterns used by the Shoshone. Crow beading often includes rose patterns as well, but their technique follows straight lines rather than the Shoshone technique, which follows the shape of the rose petals and leaves. “The Shoshone, like other Native Americans, use elements that surround us, like mountains seen as geometric designs on our moccasins. Roses are something beautiful in nature, which surrounds us. Originally, we used the wild rose, but after the Shoshone were exposed to embroidery through the boarding schools, we began
making more elaborate designs.” (Vivian Swallow)

Moccasins are the typical footwear of many indigenous groups across the United States. There are two main types of moccasins that can be found in the Plains. One type of moccasins uses one sheet of buckskin to wrap entirely around the foot creating a soft sole. The piece of buckskin is sewn closed at the toe and along the outside of the shoe. The second type of moccasin is called hard moccasins. This type has separate stiff rawhide soles that are sewn to the soft buckskin upper portion of the shoe.
Leather strings are added as lacing on both types of moccasins. Elaborate beading was commonly added to moccasins that were used for festivals and ceremonies, while everyday shoes were usually plain. The Riverton Museum has a small exhibit featuring the beading of the Northern Arapaho and the Eastern Shoshone. Come check out our exhibit during our open hours Monday-Saturday from 9-5 pm.

Next up for the Fremont County Museum
December 2022-October 2023 at the Pioneer Museum, “Wind River Memories: Artists
of the Lander Valley and Beyond” art exhibition
January 28, 6-8pm at the Dubois Museum, “Astronomy of the Winter Sky” by Tom
Herret, Wyoming Community Bank Discovery Speakers Series

Call the Dubois Museum 1-307-455-2284, the Pioneer Museum 1-307-332-3339 or the
Riverton Museum 1-307-856-2665 for detail regarding their programs.
The Wind River Cultural Centers Foundation has been created to specifically benefit
The Dubois Museum, the Pioneer Museum in Lander and the Riverton Museum.  The
WRCCF will help deliver the long term financial support our museums need to flourish.
In the current economic environment, the museums are more reliant than ever on
donations from the private sector to continue to provide the quality programs, collections
management, exhibits and services that have become their hallmark over the last four
years.  Please make your tax deductible contribution to be used specifically for the
benefit of the museum of your choosing by sending a check to Wind River Cultural
Centers Foundation at PO Box 1863 Lander, WY 82520 or taking it directly to the
museum you choose to support.