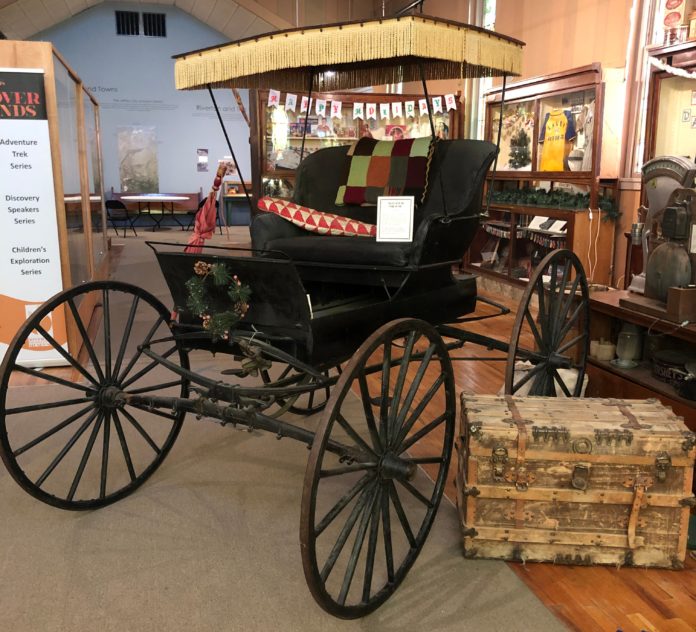 Black Buggy Located in the Main Exhibit Hall at the Riverton Museum.

Before the horse-drawn vehicle was invented, the domestication of horses and the invention of the wheel took place. The time in which wild horses were domesticated is disputed. Currently, the hypothesis is that the horse was domesticated by the Botai Culture, in the Akmola Province in Northern Kazakhstan, in approximately 3500-3000 BCE. It is believed that the Botai Culture adopted horse-back riding to aid in hunting the abundant number of wild horses in the area. This hypothesis is supported by an increase in wild horse bones excavated in garbage deposits. Traces of horse milk fats soaked into pottery shards that are dated to 3,500 BCE also suggest that the Botai had begun milking horses. Evidence of wear caused by using a bit was also found in horse teeth discovered at two Botai sites dated to 3500-3000 BCE.

In addition to evidence of bit use, evidence of a corral has been found at a site in Krasnyi Yar. The corral was identified by postholes forming a circular fence and soil analysis that showed ten times more phosphorus inside the circle than on the outside indicating the remains of manure inside the corral. However, a study conducted in 2018, indicates that the horses from the Botai Culture sites did not contribute significantly to the genetics of the modern domestic horse. This indicates that although the Botai Culture may have been the earliest people to domesticate the horse, a separate domestication event may have been responsible for the modern domesticated horse. The clearest evidence of horse domestication comes from the Sintashta and Petrovka cultures located in the steppes of the Ural Mountains. At these archeological sites, horse leg bones and skulls had been interred with the remains of chariots in about 16 graves dated to about 2100-1700 BCE.

At about the same time as the domestication of the horse, the wheel was invented in Mesopotamia. Evidence suggests that the wheel was originally created to be used as a potter’s wheel around 3500 BCE. The first evidence of wheeled vehicles is shown in a piece of Bronocice pottery discovered in Poland that dates to circa 3370 BCE. It is believed that these early wheeled vehicles were pulled by domesticated cattle. The first evidence of the marriage of animals from the Equidae (horse) family and a wheeled vehicle is shown in a Sumerian artifact known at the Battle Standard of Ur, dated to approximately 2,500 BCE. The Battle Standard of Ur is a hollow wooden box that depicts scenes of war including wheeled carts pulled by the Onager, which is a species of wild donkey native to Asia.

The earliest known form of a horse-drawn vehicle was the chariot, which first appeared in burial sites from the Sintashta-Petrovka Culture mentioned earlier. A chariot is a two-wheeled vehicle with room for two people and pulled by one or two horses. Following the success of the chariot, horse-drawn vehicles spread around the world and were known by many different names. The carriage is a private four-wheeled vehicle that is commonly used to transport people and are usually horse-drawn.

In Ancient Rome the essedum and cisium were two types of carriages that were used to transport passengers. The essedum had two wheels with no top and a closed front. It was used for two passengers standing up. The cisium was similar, but it had two seats for passengers. These were used in a similar manner to the modern-day taxi. Similar to the modern-day bus, a raeda was a carriage with four wheels, many benches, a space for luggage, and was drawn by up to four horses. For wealthier Romans, the carpentum was a carriage with four wheels, a wooden arched rooftop, and a spacious, decorated interior and could usually accommodate two passengers. Travel in Ancient Rome was slow and exhausting. Roman carriages lacked suspension, which made the journey uncomfortable.

Suspension was one of the great innovations for the carriage. Carriages with suspension were known as the chariot branlant. Medieval illustrations show the addition of chains to provide suspension for the carriage. To provide a smoother ride than the Roman carriages because the compartment was no longer resting on turning axels. The chariot branlant were typically ridden by royalty or aristocrats, were elaborately decorated, and were often pulled by two to four horses depending on the weight of the carriage. The more elaborately decorated carriages were lined with gold. In the 15th century, the Kocsi, also known as a coach, was invented in the village of Kocs in Hungry. The Kocsi was an open carriage made of a wooden frame with saddle-shaped sides made of wickerwork. Passengers sat on raised seats above a larger back wheel, which made the ride more comfortable. The appeal of the Kosci was that the vehicle was light and made travel between cities faster. Soon the coach overtook the chariot branlant and became the preferred mode of transportation in Europe.

Innovations continued to be made to the coach to make transportation faster and more comfortable. One improvement was the addition of steel spring suspension to make travel more comfortable. In the 18th century, Erasmus Darwin improved the steering system of the coach to help make the carriage easier to pull and less likely to overturn. In addition, carriages and other horse-drawn vehicles gradually became more accessible to the lower-class and were no longer considered to be the mode of transportation exclusively for the rich.  After the invention of the steam engine and the automobile, the horse-drawn vehicle gradually began to disappear. Today carriages are still used in tourism as a novel way to go sightseeing, in modern-day royal processions on special occasions, or by some minority groups, such as the Amish.