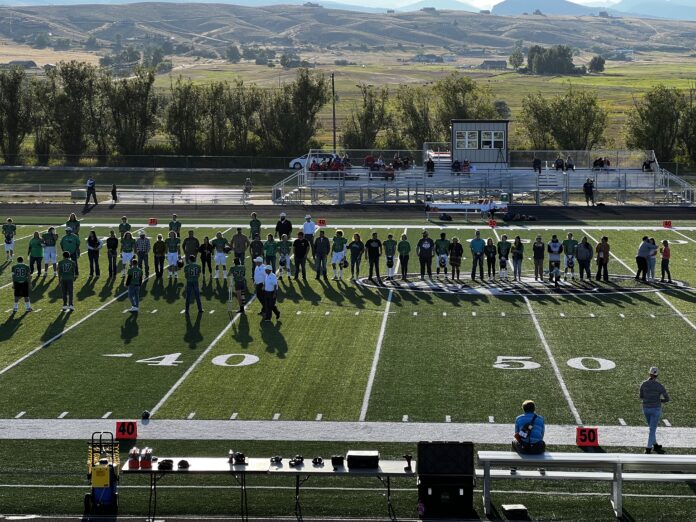 (Fremont County, WY) – The Lander Valley High School Tigers had their first home game of the season last week while recognizing 11 seniors on the team. They would battle Evanston who returned to Fremont County after knocking off Riverton last week.

In the first quarter, the Red Devils would strike first on a one-yard touchdown run from Cohen Morrow to give Evanston a 7-0 lead. Later in the first, Morrow would score against to make it a 14-0 lead heading into the second quarter. The only score in the second would come from a 39-yard field goal off the foot of Matisse Weaver to head into halftime 14-3 in favor of Evanston

The second saw the Lander Tiger seize control of the game. Brenon Stauffenberg connected with Gabe Harris for a 46-yard touchdown reception to cut the lead 14-10. Later in the third quarter, Matisse Waver would score on a run from three yards out to make it a 17-14 ball game. The fourth quarter would only see one score which included an 18-yard touchdown pass from Stauffenberg to Weaver to conclude the scoring.

The Tigers move to 2-1 on the season and will begin conference play at home this week when Buffalo comes to town. Catch the game live on KOVE 1330 A.M., 107.7 F.M., and Streaming online on our County 10 YouTube and Facebook page.

Stats from the Tigers: