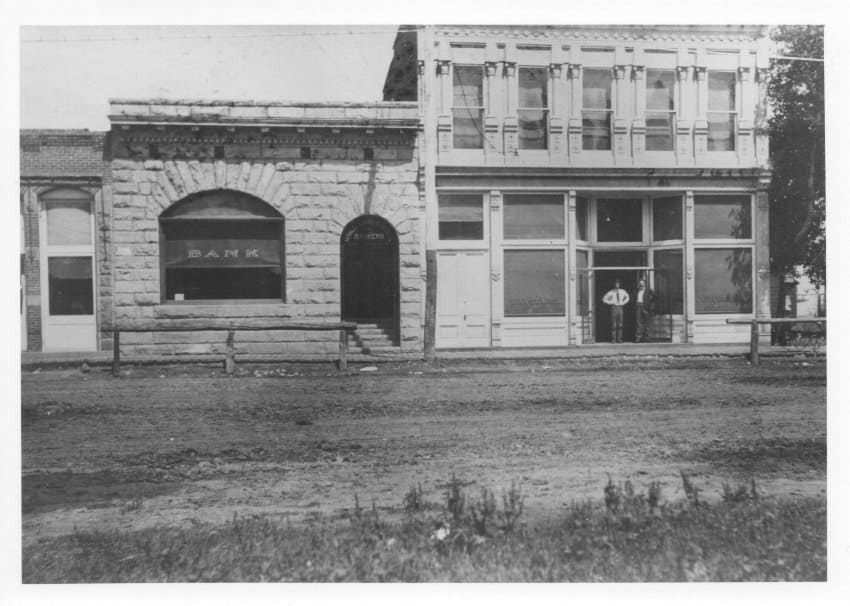 Even though it wasn’t the first bank in Lander (that honor goes to Eugene Amoretti’s First National Bank which was originally located in the stone building where The Nature Conservancy is today), the Lander State Bank had a long history.

In 1890 Fred Noble (who also helped build the Noble Hotel in 1918), William Noble and A.D. Lane opened a bank called the Noble, Lane, Noble in the Noble and Lane Building, which still stands on North Main. The native stone part of the building was the bank (the huge steel vault is still in the main room of the building), and the two story building next to it was a general merchandise store (today the building is home to the Alchemy, an artist’s collective)

In 1915 the three men reorganized the bank and it became the Lander State Bank. Upon completion of the Noble Hotel in 1918, the bank moved to the lobby of that building where it was in business for 42 years.

In 1960, the bank planned to build a new, modern building at the corner of third and Main. There was talk of renovating the bank in the Noble Hotel, but the bank had purchased the lot in 1956, and the decision was made to build since renovating the old bank would have cost as much as a new structure.

Before the new bank was built on the corner lot at 3rd and Main, the old building had to come down though. The log and adobe brick building that was there had been built in 1887 as a saloon by John Riley, who called it “The Hole in the Wall,” in honor of Butch Cassidy’s Wild Bunch gang.

The saloon closed in 1891 and a variety of businesses occupied the old building over the years including a drug store, millinery shop, barber shop and various others. Next to it was the Orchard Building, built in 1910 and home to many different businesses.

The 1887 saloon building came down in three days in 1960 and construction of the new modern bank began.

The Lander State Bank opened in May 1960. It was a modern building with lots of glass, a suspended staircase and an elevator – a rarity for Lander. Many of these architectural features are still visible even though the building is now the Bank of the West and connected to the Orchard Building next door.