(Lander, WY) – Stefani Farris, of Lander, and Dakota Richardson, of Jackson, are the recipients of the Wyoming Arts Council’s 2021 Blanchan and Doubleday writing awards.

The Neltje Blanchan Memorial Writing Award and the Frank Nelson Doubleday Memorial Writing Award are made possible through the generosity of a private donor. The Blanchan award is given for the best writing that is informed by a relationship with the natural world; the Doubleday award is given for the best writing by a woman writer. Both awards are designed to bring attention to writers in Wyoming who have not yet received wide recognition for their work, and to support emerging writers at crucial times in their careers.

Farris’s manuscript of short stories, “Grown Children,” was a finalist for the Iowa Award for Short Fiction and a two-time semifinalist for “The Journal’s” Non/Fiction Prize. Stefani has been a resident of the Ucross Foundation (2018, 2008) and the Island Institute in Sitka, Alaska (2005). Her work appears in “Gray’s Sporting Journal,” the “Colorado Review,” “Zyzzyva,” “Epiphany,” “Passages North,” and elsewhere.

Farris holds an MFA in fiction from the Inland Northwest Center for Writers at Eastern Washington University in Spokane, and she studied creative writing as an undergraduate at the University of Wyoming. She is also the grateful past recipient of two Wyoming Arts Council literature fellowships (2000, 2011). She lives with her family in Lander, where she works for the Equality State Policy Center and is finishing a novel.

Richardson grew up in the woods of Connecticut and spent much of his time running small boats across the surrounding seascapes of New England. He began working as a saltwater fishing guide during the summer months, while attending school in the Berkshire Mountains and then in Manhattan at New York University.

After graduating, Richardson packed up his truck and moved to Jackson, Wyoming. There he began work as a fly-fishing guide on the Snake River and as a snowmobile guide during the winter. The backcountry of Wyoming has informed all aspects of Richardson’s life; as a fisherman, hunter, and outdoorsman. he finds no better perfection than that of the open land and wild forests through which he can float, climb, ride, and revere.

The juror for this year is Louisa Luna.Luna is the author of five novels, including “Two Girls Down” and “The Janes” from the Alice Vega series. She was born and raised in the city of San Francisco and now lives in Brooklyn with her husband and daughter.

The Blanchan and Doubleday awards program is an annual competition administered by the Wyoming Arts Council. For more information about the awards visit the Arts Council website wyomingartscouncil.org or call 307-247-6673. 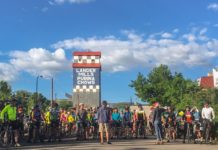