(Lander, WY) – The year the LVHS boys began their historic state title run, none of the swimmers and divers on the current team were born. The lone senior Tigers — Benaiah Dolence and Colton Wietzki — were several years from entering the world. It’s highly doubtful that they were even a twinkle in their parents’ eyes. Their parents may not have even met yet.

Lander has captured 24 consecutive state championships since that 1997 season. The 24 swimmers and divers on the 2020-2021 squad are determined to push that number to 25, marking a quarter century of unprecedented swimming dominance.

The formula for sustained success has been selflessness and commitment to a “team before me” attitude. Titles have been won by LVHS squads buoyed by the performances of a handful of top-tier athletes, others have been captured by rosters reliant on superior depth.

Head coach Shawna Morgan and assistant Tim Hester understand that the dual threat of next-level talent and potential point scorers slotted on the entry sheet from top to bottom is a special combination.

“We have a lot of amazing team and individual goals for this season, and as coaches, we will be working to make sure they are accomplished. This team has so much talent that our main goal is to complete the season!

“The 3A class has a new team to compete against this year in Green River,” adds Morgan. “They bring lots of swimming experience and talent into an already strong 3A pool of athletes, so that will shake things up come February at state.”

Regardless of circumstances or foes, the Lander lineup is formidable.

“Our team will be fearlessly led by our two seniors,” Morgan says of Dolence and Wietzki. “Both have qualified and placed at state for their entire high school careers.

“The junior class will be led by returning All-American swimmer Jonny Kulow and individual state champion Nolan McFadden. Brennen Blackburn joins us this year from Utah. He comes to us with a fierce competitive attitude and extreme work ethic. He will undoubtedly be a huge part of this team’s success this season,” Morgan explains of the Tiger transplant.

“Our biggest class is our group of sophomores. Returning individual state champions from this group include Dylan Huelskamp and Brayden Brown.” Huelskamp captured the 2020 state title in the 200 yard individual medley as a freshman, while Brown swam to a thrilling win in the 500 yard freestyle. “Our returning state qualifiers and placers from the sophomore class include Hezekiah Dolence, Caleb Else, Erik Harms, Scott Logan and Justin Whelan.”

Morgan says that this year’s frosh are few-but-focused. “We only have three freshman this year,” she explains, “but Benny Kulow, Reed McFadden and Aiden Whelan come from swimming backgrounds and have hard-working attitudes. They know what is needed to play important roles on this highly-talented team.”

A new coach joins the Lander staff this year. Shea Boyle will head up the diving crew. “Shea has been diving her entire life, capping off her career at the University of Wyoming,” says Morgan. “She has two returning state-qualifying divers in sophomores Noah Larsen and Logan Wietzki. Three new divers — sophomores Brayden Hickerson and Joel Bever and junior Luke Morneau — join the group, as well. I can’t wait to see what they accomplish.”

“Oh man am I excited for this season,” Morgan shares, “and terrified all at the same time because of all this COVID stuff.” A sign of the times, competitions — both home and away — will feature more masks and fewer spectators.

Morgan asks that fans support the team in whatever ways they can during the new normal.

“I know we are limited on the number of spectators we can have at meets, but we ask the Lander community to cheer us from wherever they may be. We thank you for your continued support as we work for that 25th consecutive state title this season.”

Lander hosts the Lander Invite today at 4:00 before traveling to Green River on Saturday.

h/t Lander swimming for sharing the above information 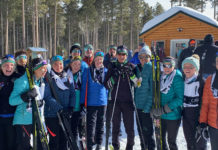 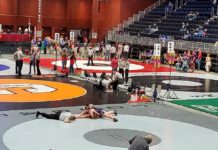 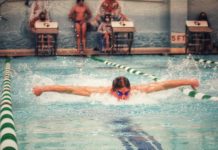