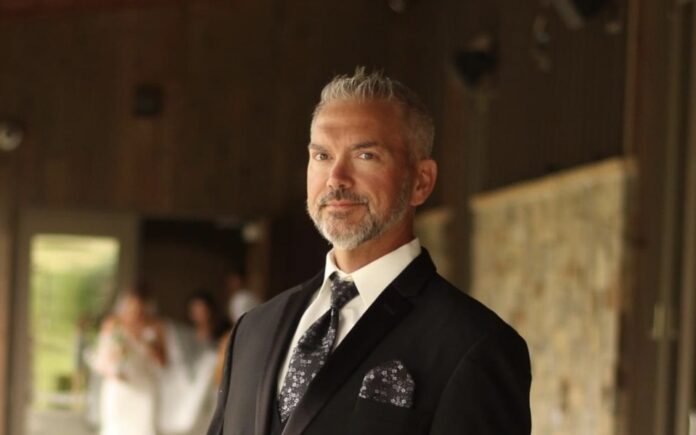 Dr. Jason Eric Muehler of Riverton, WY died peacefully with his loving wife by his side, September 17, 2022. He was 54 years of age. Born September 15, 1968, in Hankinson, ND, to Paul and Darlene Muehler. He was the youngest of six boys. Jason graduated in 1986 from Hankinson High School. He then attended North Dakota State School of
Science, in Wahpeton, ND and the University of North Dakota in Grand Fork to further his education towards his pursuit of being a chiropractor. Jason accomplished his goal and received his degree of Doctor of Chiropractic (D.C) from Palmer College of Chiropractic in
Davenport, Iowa in October 1991.

Jason moved to Lander, Wyoming in 1992 and began working at his first Chiropractic office there. Jason was able to buy the practice and changed the name to Better Life Chiropractic which embraced his vision to implement his philosophy to improve patient’s lives through the nervous system and spinal health. As growth of his Lander location increased Jason opened a satellite office in Riverton, WY and eventually made Riverton the home of his permanent practice.

Jason loved God and out of his love for Him, he began his ministry through his practice and his involvement in the community. He was a firm believer that you could share the love of Christ outside the four walls of a church. He was passionate about people and specifically his patients. Even though he was in the fight for his own life, he continued to care for them at every opportunity he was able. He did not give up on what he was called to do and just recently completed his continued education for the renewal of his license on August 20, 2022.

Jason met Stacie Sifuentes in February 1993, and they married on May 28, 1994. Together theirs was a love story of adventure, passion, team work, generosity towards each other and those around them, and unconditional love. They honored their commitment and vows, “for better or for worse, in sickness and in health.” Together they raised three beautiful children, Kenisha, Kierra and Kendric. He took the most pride in being a husband and a father. He supported his kids in everything they did, from being their biggest cheerleader, to helping them study, coaching them and giving them life advice and counsel. You could always count on him re-focusing any decision they were facing back to God and His plan.

Jason loved the outdoors! From fishing to hunting to being out in his garden. He had a green thumb. He could plant anything from a seed, and it would grow into the most beautiful vegetable or plant. He took pleasure in watching things and more importantly people grow. He loved his time coaching, specifically baseball. It wasn’t just the sport, but the development of the boys in the sport. Planting seeds in them and mentoring them to become young men of character, determination and integrity. In his passing countless young people wrote to say, “he was like another father to me”. Jason knew the seeds of love he planted through all his relationships would continue to grow beyond his time on this earth.

Living life from Above, Down, Inside, Out was his life mantra that steadied him during his two and a half year cancer battle. Every day he chose to put Faith over Fear and trust God one day at a time no matter the outcome. During this time, he made it his mission to tell everyone about God’s goodness, faithfulness and lead them to a relationship with their creator. Jason was strong. He was superman. The amount of pain he endured without complaining, the ability to care for his family and patients while fighting his own battle was admirable to say the very least. His perseverance, his tenacity, his defiance to cancer has made those of us remaining behind incredibly proud of him.

He is preceded in death by both sets of grandparents Killian (Kelly) & Effie Zentner and Albert & Laura Muehler. His father, Joe L. Sifuentes. His brother, Michael Mills.

He is survived by his wife, Stacie Muehler of Riverton, WY, his daughter Kenisha and son in law Brandon Fullerton and grandson Noah Jase Fullerton all of Billings, MT. His daughter Kierra Muehler of Billings, MT and his son Kendric Muehler of Riverton, WY. His parents, Paul and Darlene Muehler, His mother, Shirlee Sifuentes, His brothers Brian (Joan) Muehler, Scott (Kari) Muehler, Darin (Kristi) Muehler, Todd (Kerri) Muehler and Tim (Paula) Muehler. His sisters, Desiree Hunter and Delilah Mills and Brother Josiah (Madelyn) Sifuentes. Also, many nieces, nephews and great nieces and nephews, all of whom he loved immensely.

One of Jason’s life’s missions was to ensure the completion of his son and daughter’s educations to the licensing for their careers. His daughters proudly realized their licensing in the medical field. His son however is currently in the middle of his dream of becoming a
chiropractor like his dad. This brought so much joy, honor and pride to Jason’s heart, so in lieu of flowers we ask that any donations be made to:
Kendric Muehler Scholarship Fund
At Wyoming Community Bank
1700 North Federal Blvd
Riverton, WY 82501