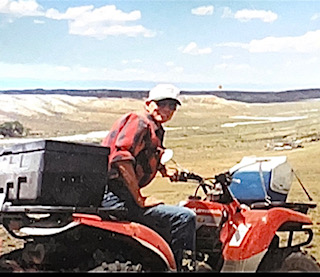 He grew up on a dairy farm near Green Valley, Minnesota where he worked hard helping his dad as any farm kid does and this is where his love of tractors started. After graduating from Marshall High School in 1967, he moved from Minnesota to live with his family in Buena Vista, Colorado. While there, he worked in a mine and attended college.

Later, he joined the Navy where he served 2 years in the Naval Reserve and 2 years of active duty during the Vietnam War. After discharge he obtained his certification in appliance and refrigeration repair. He worked for Sears as an appliance repair tech in Colorado, Laramie and eventually landed in Riverton.

In 1978 he started for UPS as a delivery driver in Riverton. He retired from UPS after nearly 30 years of service. After retirement he spent time working on his John Deere Model A tractor and 4-wheeling.

Tom had a passion for tinkering on tractors (old and new), was a history buff and adored his grandsons. Anyone who knew him knew how proud he was of those boys.

Funeral services will be held November 1, 2022 at 10am at the Davis Funeral Home in Riverton.

In lieu of flowers the family asks that you make a donation to the American Heart Association.