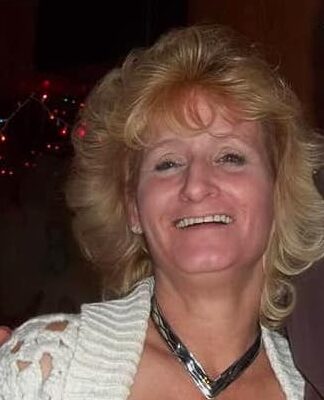 Terry Lee Hubenka (Dow), 56, passed away peacefully at her home on September 17th, 2021. She was born in Ashland, Oregon, on January 16th, 1965, the daughter of the late Denny Eldon Dow and Willa Dow (Snelling). In addition to her parents, Terry was preceded in death by her brother, Hector Dow, and her beloved niece, Kassie Jo Fowler.

Terry had an unparalleled zest for life and shared it with everyone lucky enough to come across her path. Her unmistakable laughter, sparkling green eyes, and contagious smile lit up every room she walked into. She was born the “life of the party”; the baby of the family with three older siblings; she was rambunctious, spunky, and had an uncanny ability to bring joy and laughter to all those she came across.

Terry shared that vibrant energy and dynamic spirit with “Dow’s Cafe” customers as a child. As a young child working behind the counter, it was there that her incomparable work ethic and dedicated drive towards excelling at any job placed in front of her began. Terry had a gift that very few people in the world have. She was beautiful, fiercely intelligent, the hardest worker you’d ever meet, business-savvy, and her irreverent sense of humor was matched only by her incredible ability to do quite possibly any mathematical equation in her mind. Terry cared more about people than she ever did money. As a result, everything she touched turned to gold. Terry dedicated her life to bringing restaurants, bars, travel plazas, and later a farm and ranch to their full potential. Her final career accomplishment was behind the pine at the Cedar Bar in Riverton, dedicating her heart, energy, and vivacious spirit towards bringing the establishment to the successful business it is today.

Terry wrote her own rules, she worked harder than anyone ever should have to, and she paved her own way. And if you said she couldn’t do it, she would make sure she did it better than anyone you’d ever seen before. She was stubborn, she was strong, and she was incredible. The universe placed many obstacles and challenges in her path that, quite honestly, most people wouldn’t have the strength or drive to overcome. But she did, and with each hurdle thrown in her way, she jumped even higher the next time.

Terry took fashion cues from no one. Instead, her signature look was all her own: cowboy boots, knee-high white socks, and jeans, the more sparkly, the better, all of which was topped off with a splash of her favorite signature perfume, “Sand and Sable”.

All who loved her dearly will never forget her tenacity, wit, charm, kindness, and undying love and care for others. She was the type of person that would drive ten hours at the drop of a hat to help a friend or a stranger, for that matter. When someone was in need, she was the first one to help and never asked for anything in return. She would give the shirt off her back and quite literally did – many times – to anyone in need, family, friend, or stranger.

Terry is survived by her loving husband, Johnnie Hubenka, her sisters, Berta Fender (Alan), Donna Fowler (Matt), and many cherished nieces, nephews, cousins, and friends. Terry was a beautiful, fierce, strong, and amazing Mom, Wife, Grandma, Sister, Daughter, Aunt, and friend to all.

Terry’s memory will forever live on through her pride and joy, her children and grandchildren. Her “pride”; a son James Dow (Jami) of Riverton, Wyoming, and a daughter, Tanya Southerland of Casper, Wyoming. Her ultimate “joy”, the shining stars of her heart and at the center of everything she loved and cherished so deeply, her beloved and treasured grandchildren, Kevin, Addison, Braxton, Kaden, Zackary, Tre’, and Lillian James.

Her fierce determination to succeed was selfless. At the root of everything terrific and wonderful of who she was and what she accomplished was her wholehearted love for her children and grandchildren. As a young mother, Terry held a fierce friendship and unbreakable bond like no other with her son, James. He challenged her, grew up with her, supported her, loved her, and made her more proud than any son ever could. In her daughter, Terry met her match. Her greatest gift to her daughter, and most honorable, was passing down her fierce independent streak, stubbornness, kindness, and innate desire to care for all to her daughter, Tanya Lee. Together, this original little family of three holds an unbreakable love and bond that will forever remain in life and in death.

Terry was a compassionate, loyal, determined, and amazing person. We will miss her every day.
Her legacy is just that, a legacy that will forever remain. Think of her the next time you pull up your cowboy boots, stop at the local Taco Johns, sit in front of the pine, eat a peanut butter sandwich, watch the Steelers take the field, and more. Let us honor the love she shared and the extraordinary life she lived.

A celebration of life will be held for friends and family on October 10th, 2021, at the Riverton Fairgrounds Industrial Building at 1:00 p.m. Honoring the courageous battle she fought with fierce determination and strength, memorial donations in her name may be sent to Tough Enough Cancer Fund of Fremont County or the Olivia Caldwell Foundation for Pediatric Cancer Research (https://www.oliviacaldwellfoundation.org).