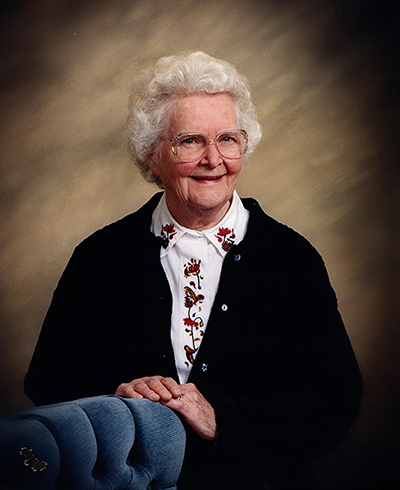 Lois Simonson, age 103, passed away peacefully on Nov. 2 at the home of her daughter and son-in-law Sara and Verlin Pitt in Lander. She lived with them for the past 12 years.
Lois was born in Groton, S.D. to Robert Bruce McCordic and Melvina (Maltby) McCordic. She had two sisters, Margaret and Ella and one brother, Robert (Bob). When Lois was four years old, the family went on a picnic, and her mother and sister drank from a contaminated well. They died from typhoid fever shortly afterwards in 1921.
Lois and her brother Bob were sent to Idaho to live with her maternal grandparents and her aunt Nellie on their farm in Rogerson, ID.
The Great Depression had a profound impact on Lois. She and her brother lived alone in an old shack during the winter of 1931 to 1932 when she was 13 and Bob was 10. She complained of the ceiling plaster falling into the bread dough she was making on one occasion.
When it snowed, the school bus couldn’t get through to pick them up, and all they had to eat were canned fruit and vegetables in an old cellar in the yard. Lois and Bob took down the posts of the fence around the yard and chopped them up for fuel that winter.
Lois graduated from Hollister High School in 1934 and attended Idaho State University in Pocatello for a year. She attended Albion State Normal School the next year. Lois then taught in Elba and Wendell, Idaho.
Lois moved to Madison, Wisc. in 1939 and stayed with her paternal aunt and uncle while attending the University of Wisconsin. She graduated in 1942 with a degree in home economics.
While teaching high school home economics in Lone Rock, Wisc. and living at a boarding house run by the Simonson family, Lois met her future husband, Melvin Simonson. They moved to Middleton, Wisc. where they raised their two children, Bruce and Sara. Melvin was a contractor, and Lois taught first grade for many years in Madison, Wisc.
In her younger years, Lois enjoyed playing golf and participating in bridge club and homemakers club. Her sense of humor and adventure were great fun to her family. Even in her later years, Lois would often participate in adventures, such as going white-water rafting at age 83, getting on her grandchildren’s trampoline and taking funny photos with her family.
Lois will be remembered as a kind and loving mother, grandmother, great-grandmother, teacher, friend and neighbor.
Lois is survived by her daughter Sara (Verlin) Pitt of Lander; daughter-in-law Cynthia Nesson of Chattanooga, Tenn.; grandchildren Kjirsten (Dave) Elsner of Belleville, Wisc., Beau Pitt of Casper and Stefani Wanner of Lander and great-grandchildren Thea, Triton and Chase.
Lois was preceded in death by her parents; sisters Margaret McCordic and Ella Curran; brother Robert McCordic; husband Melvin Simonson; son Bruce Simonson and step-granddaughter Molly Bonner.
Cremation has taken place. Services are not planned at this time.

NOLS to host movie screening of The Rescue