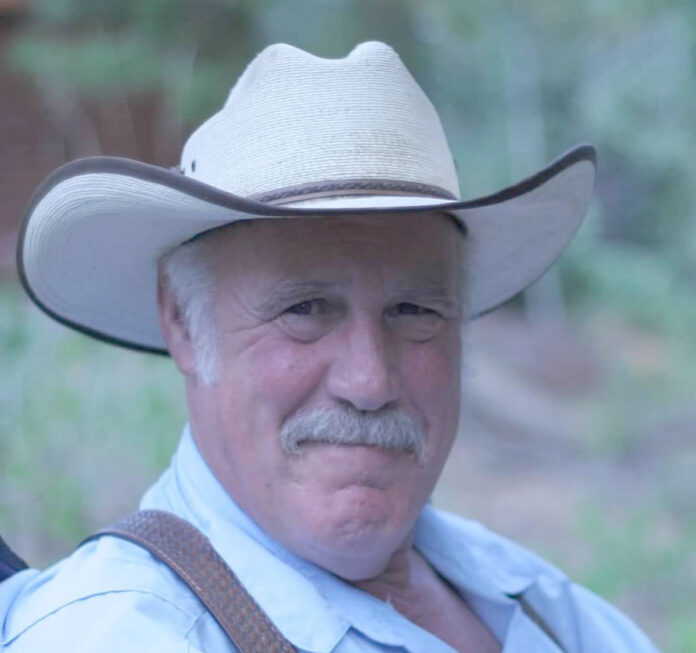 The earth has lost One… Fine… Cowboy!

James Ronald Crump was born January 20, 1953, in Jackson, Wyoming to William Crump and Dolores Ohswaldt Crump. The family lived in Pinedale at the time. The family moved to Lander in 1954; and then onto the Crump Ranch on Squaw Creek Road outside Lander when he was about 3 years old. Jim says he started shooting a bow and arrow at around 4 years of age; and killed his first rabbit when he was 6. He started milking the family cow when he was five years old.

Jim attended Southside Elementary in Lander through the 3rd grade, then transferred to North. When he was about 12 he went to his Grandpa Joe Crump’s ranch in Colorado and worked part of the summer. He was able to go again when he was 14. These experiences were very important to him. He treasured the memories.

Jim attended Freshman through Junior year at Fremont County Vocational High School (which later became Lander Valley High School). He then was an exchange student to Denmark for his Senior year. He was graduated from LVHS.

When Jim was 15, he wrangled horses at Brooks Lake for the Diamond G Ranch. At 16, he attended a course at the National Outdoor Leadership School, and then became employed as a horse packer for NOLS. At 19, he ran a hunting camp for Boulder Lake Ranch. He killed his first elk (with a bow) when he was 19. Jim was an avid team roper, enjoyed horse packing into the Winds and Absaroka’s, and hunting. He attended some coursework at UW.
Jim then began his career as a Carpenter, as he worked for several contractors in the Lander Valley, learning the trade. He was then married and had two sons. In 1984, Jim went to Antarctica as a Carpenter at McMurdo Station at the South Pole. He went on to work two more seasons at McMurdo.

He married again and had four children from that marriage. The family lived in Washington for several years, and then moved to Vermont, where they divorced. Jim’s travels took him to Denmark, the South Pole, Norway, Sweden, Germany, Berlin, New Zealand (4 times), Australia (twice), Iceland, Easter Island, Chile, Tahiti, Argentina, Bolivia, Peru, Ecuador, Venezuela, Canada, the Amazon (three trips), Machu Picchu, the Hawaiian Islands, Thailand, and every state in the United States except Arizona and Alaska. He loved archery, firearms, skating, skiing, reloading, climbing, backpacking, working with firewood. He never met an animal he didn’t love.

Jim returned to Wyoming in 2009 to take care of his father and manage the family ranch on Squaw Creek. It was on May 20, 2010, when he met the love of his wife, Lori (Merrill), at the Kmart parking lot in Riverton. They got engaged at that same parking lot and were married May 8, 2015, in Lander. They then had 7 ½ blissful years together. They lived a lifetime of love in those few years – and spent every moment they could together.

Jim was a gentle giant of a man. He fell ill with VEXAS Syndrome and retired in 2021. He went home to be with his Father God on December 29, 2022, in Salt Lake City Utah while he was there seeing his team of doctors. He was cremated and his ashes will eventually be interred with those of his wife, Lori. No services are planned.

Jim is survived by his wife Loriann and six children: Alex (Jessie), Neil (Heather), Clara (Paul), Annette, Zevi and Asa. He is also survived by his stepchildren Katie, Mika (Jake) and Benjamin. His surviving siblings are Sandra, Sharon, Tom (Kathy) and Robert. He doted on his numerous grandchildren. They knew him as “PopPop.”