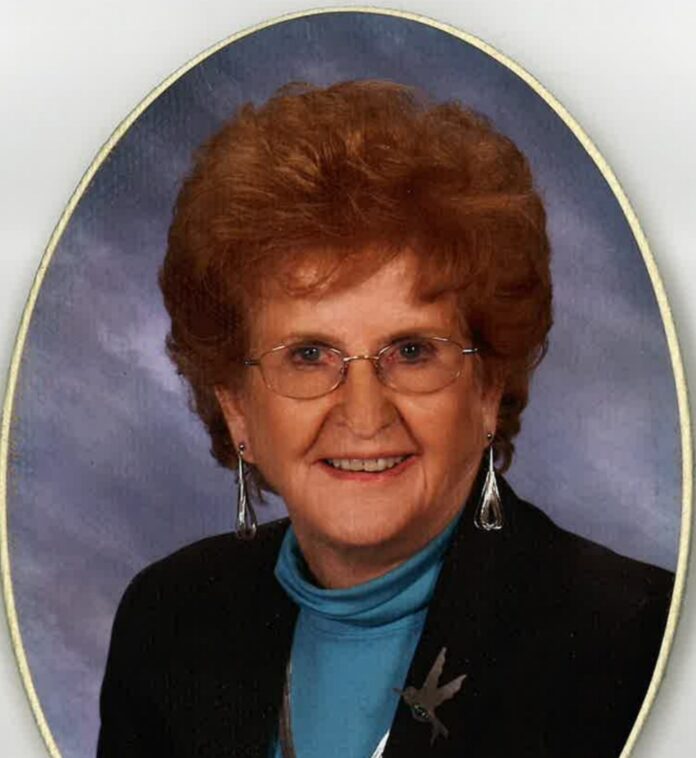 Jeanne K Lee died August 20, 2021 at Westward Hights at the age of 95. Graveside services will be held at Mount Hope Cemetery on Thursday August 26, 2021 at 10 am.
Jeanne K Lee was born February 15, 1926 to Scottish immigrants, Andrew and Mary Ann Smail in Rock Springs, Wyoming. She was the youngest of 8 children. She was raised on a farm in Eden Valley, Wyoming, graduating in 1943 from Eden Valley School. Jeanne remembered her childhood fondly, she was very musical and taught herself to yodel while hearding her cows and to play piano by ear. She loved riding her saddle horse Rhondo. Some of her favorite memories were in the saddle.

Jeanne came to Lander in 1943 to take a position with the Bureau of Indian Affairs in Ft. Washakie. She met her husband Johnnie D. Lee, a rancher, in 1944 at Svilars, they were married the same year. The couple then moved to his ranch 20 miles south of Lander towards South Pass on Twin Creek. They lived there year round, before electricity or even the highway ran through. There they raised sheep, cattle and Registered Morgan Horses, at one point they raised Beefalo for a short time. They purchased an additional ranch in 1948 known now as ‘Johnnie Lee’s Corner’, and also acquired Dry Lake at the Rawlins Junction. Johnnie Lee’s Corner is where they raised their three children, Doug, Kathy and Steve. Jeanne worked at the Fremont County Treasures office for many years, helping out during the Tax and Vehicle License rush. In the spring she would help out in the Title office. She spent her summers working the ranch, haying and riding for cattle. She loved the ranch life and was proud of its culture. They were active in the One Shot Antelope Hunt for many years, hosting folks like Roy Rogers and Robert Fuller, a good family friend, at their ranch. Jeanne enjoyed a good party, entertaining company and could tell a heck of a joke.

Jeanne was a spark plug, she loved Lander and its residents. She was very active in civil affairs and was responsible for many endeavors that made Lander a better place for all. During the mayoralship of Hazel Spriggs in the early 70s, Jeanne decided Lander needed a nursing home. Along with several business people in Lander, they worked for permission from the State Health Department to build Westward Hights, she was still on the Board of Directors at the time of her death. Later she was active in building Mountain Vista Retirement Home.

Jeanne was the Chairman of the Bronze Roundup Committee in the late 1990’s and early 2000’s. She and other hard working and dedicated citizens wanted Lander to benefit from the beautiful bronze art by Eagle Bronze depicting the West. After 3 years of hard work they raised $200,000 to purchase the rider and and three steers that guard the south entrance of Lander today. They later donated a large bronze and money in excess to the Museum of the American West.

Jeanne was a member of many organizations and spent her time networking with great people. She was a member of the Daughters of the Nile, Charter member of the Fremont County Cowbells, the Lander United Methodist Church, and was active in the Republican party. She was an over 50 year member of Epsilon Sigma Alpha having been International Chaplain and State and Local President many times. She served anywhere she could including Westward Hights and Mountain Vista Retirement Home. She loved to play bridge with her favorite people who had played together for over 20 years. She and her husband Johnnie sold their beautiful ranches in 1993 and retired in town where they spent time with friends and family and traveled south for the winter.

From small Wyoming beginnings, Jeanne lived a big Wyoming life. She will be remembered with fondness by her family and her community. She was proceeded in death by her husband of 52 years Johnnie D. Lee, Son Johnnie (Doug) Lee, and her partner Ben Weeks. Also proceeded by her parents and 4 brothers William, James, Andrew, and David Smail, her 3 sisters, Elizabeth Moffatt, Annie Sims, and Mary Klinger Hornecker. Jeanne was the last living Smail sibling.

Jeanne is survived by her daugher Kathy Lee of Pinedale, son Steve Lee (Tammy) of Lander, her Granddaughters Amy Graham of Pindale, Joni Lee Martinez (Ryan) of Lander. Her Grandsons Garrett Lee (Jamie) and Tyson Lee (Whitney) of Lander. Also her dear friend Sylvia Martinez. She was blessed to have a stong relationship with her great grandchildren Abbi and Page Graham, Dillyn and Ember Lee, Ramsey and Amelia Martinez, Riley Pounds and Macy Lee. And her numerous nieces and nephews.