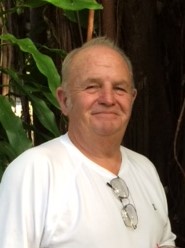 Don Ellis, 76, passed away on December 9, 2022, at his winter home in Yuma AZ with his wife by his side and where he wanted to be.

Don and his twin brother David were born in Lander, WY November 30th, 1946, to Lamar and Anna Jean Ellis.

Graduating high school in 1966 and went on to Jr. college in Powell WY and graduated College of Great Falls, MT with a degree in Physical Education with a minor in Business. In 1990, Don moved back to Lander and started Ellis Concrete with his sons Donnie and Duane.

Don took much pride in his concrete work and would point out his work all around Fremont County. He was very proud of his boys; Donnie took over Ellis Concrete in 2015, and is still running it today. And Duane became a Wyoming Highway Patrolman in 2001 to current.

Celebration of Life will be held in Lander this Spring 2023.