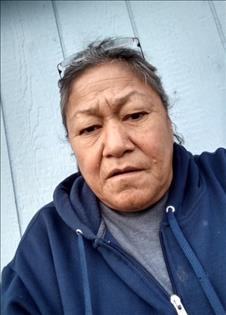 Cynthia Julia Shakespeare was born on December 11, 1962 in Riverton, WY to Dana Garnett and Geraldine Angela (Spoonhunter) Shakespeare.  She grew up on the Wind River Reservation and attended schools at Arapahoe, Flandreau School in South Dakota, and Wyoming Indian High School.

Cynthia was baptized into the Catholic Faith.

She was a welder’s assistant by trade and worked with her father, Dana Shakespeare, traveling to many states, Montana, Utah, North Dakota, Oklahoma, Texas, California, and Alaska.  She also had worked as a roustabout, ranch cook, and bookkeeper.

She enjoyed beading, cooking, and visiting with family and friends.

On-line condolences may be made to the family at www.TheDavisFuneralHome.com.

Services under the direction of Davis Funeral Home.