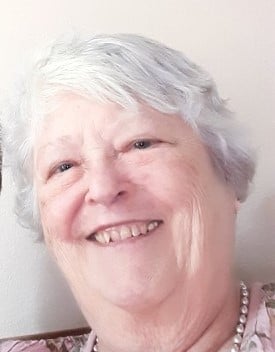 Heaven gained another angel on Friday September 30 th , 2022, Carol Jean Moore who was born on September 25, 1947, in Yakima, Washington to Elsie and Clarence Axtell, the oldest of five children.

At a young age, Carol and her family moved to Jeffrey City, Wyoming. During Carol’s high school years, she went to Lander Valley High School. She then met the love of her life, Ray Moore, who she married on November 13 th , 1965; and who she is now resting eternally in peace with. Carol and Ray raised two beautiful daughters, Teresa, and Sheila.

Carol worked at the cable company and raised the girls at the same time with her husband.
Carol filled her time after her daughters left home by working full time and studying for her bachelor’s degree in business. Later, Carol and Ray assisted Teresa in raising their grandsons Clayton and Patrick whom she loved to spend time with. We (Sheila and Dora) were blessed to have mom living with us the last three years. Carol’s hobbies were camping, fishing, watching Ray hunt, sewing, knitting, crocheting, as well as card and boardgames.

Carol was preceded in death by her parents, husband Ray, daughter Teresa, and sister-in-law Sharon Larson.

Services will be Tuesday, October 11, 2022, at 11:30 a.m. at the First United Methodist Church in Lander, Wyoming with inurnment following at Mount Hope Cemetery.

Donations may be made in her honor to the American Diabetes Association or the American
Kidney Fund.