(Lander, WY) – The Wyoming Department of Transportation (WYDOT) announced last week that fog sealing on three highway shoulders was scheduled to begin this week near Lander.

Today, May 4, they announced the planned work on WY131 (Sinks Canyon Road mileposts 1.75 to 9.00, southwest of Lander has been moved to Thursday, May 6.

Folks are asked to avoid driving, running or cycling on the fog-sealed highway shoulders for 24 hours, according to WYDOT fog sealing foreman Tyd Erickson of Meeteetse.

County 10 will keep you posted on any additional updates released by WYDOT. 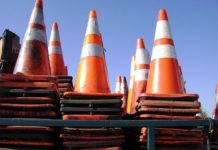