Gabrielsen nominated for Wyoming Sportscaster of the Year 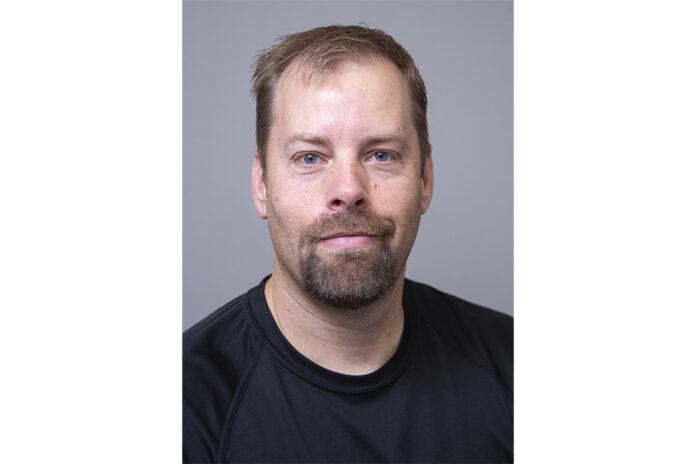 “While we have long known that there are so many deserving sportscasters and sportswriters all over the country, for too long, our nomination process limited the number of state finalists,” NSMA executive director Dave Goren said. “I am happy that John Gabrielsen has now been recognized for his talent and dedication and wish him luck in the final balloting going up against the six other talented sportscasters in Wyoming.”

Gabrielsen has a long and distinguished career in sportscasting. He oversees the operation of one of Fremont County’s most listened-to radio stations Rustler Radio, KCWC 88.1 FM. As General Manager of KCWC 88.1 FM and Rustler TV, as well as faculty of New Media at Central Wyoming College, he has a deep understanding and love of Wyoming sports.  His voice is well-known and iconic for Wyoming sports fans.

“John’s unrelenting passion for sports broadcasting is evident in everything he does, from traveling across many miles to broadcast high school and college sports, providing sports updates for multiple media outlets, and educating the next generation of sports broadcasters,” says Dr. Kathy Wells, Central Wyoming College’s Vice President for Academic Affairs. “He has truly mastered the art of sports broadcasting.”

“John is an amazing broadcaster and we’ve been very fortunate to work with him,” said Will Hill, County 10’s owner. “His first game calling the Wolverines for us was his 100th game after 99 consecutive games on-air as the Voice of the Wolverines in the 90’s and early 2000’s. John is a true class act and local sports and radio legend who embodies Wyoming Sportscaster of the Year.”

He is the Winner of Wyoming Association of Broadcasters: Best Play By Play, Best Sports Broadcast, and Best Commercial Production, numerous times each He also has been recognized by the Wyoming Coaches Association Hall of Fame for Distinguished Service and Wyoming HS Athletic Directors Hall of Fame for Distinguished Service. In addition to being a co-founder of Wyopreps.com, he was the Head Coach of Riverton 8th Grade football for nine years and has coached Little League baseball, junior football, and youth basketball for about 20 years. Gabrielsen has been contracted numerous times by the NFHS (National Federation of High Schools) to organize and provide play-by-play announcers for state championship basketball and football for the WHSAA (Wyoming High School Activities Association).

This year’s Hall of Fame finalists feature men and women who have covered a variety of sports, from tennis (Mary Carillo) to hockey (the late Dan Kelly) to auto racing (the late Chris Ecomomaki), as well as baseball, basketball, and football.

Final voting begins December 1 and ends December 31. Winners will be notified during the first week of January and announced on January 9. The 63rd NSMA Awards Weekend & National Convention will be held June 24-26, 2023, in Winston-Salem, NC.

With a mission to transform lives and strengthen communities through learning, leadership and connection, Central Wyoming College offers two bachelor’s degrees, 58 associate degrees and 10 certificates. The college includes the main campus in Riverton, an outreach center and the Alpine Science Institute in Lander, as well as outreach centers in Jackson and Dubois. Central Wyoming College is a designated Native American Serving Non-Tribal Institution (NASNTI) and serves the largest American Indian student population in Wyoming.