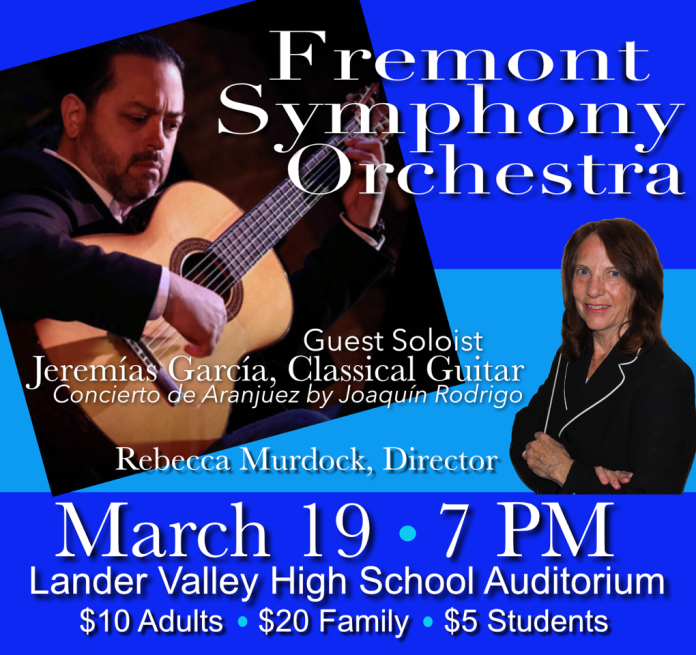 On March 19, 2022, the Fremont Symphony Orchestra will be featuring guitar virtuoso, Jeremías García. García will be featured at the Lander High School auditorium at 7 pm.

According to Rebecca Murdock, the FSO Director, García will be performing the Concierto de Aranjuez by Joaquin Rodrigo. Jeremy Garcia has performed all over the United States. He also has collaborated as a soloist with the Houston Grand Opera, and as a soloist and composer with the Helena Symphony in Montana, the Fort Bend Symphony, and Brazosport Symphony. García has performed in numerous festivals as a soloist and worked with many top flamenco artists.

As an educator, Garcia served as Director of Guitar Studies at San Jacinto College for 20 years. He currently serves as the Associate Artistic Director of the Houston Classical Guitar Festival and Competition. He has a Bachelor of Music degree in Classical Guitar Performance from Texas A&M University – Corpus Christi and a Master of Music degree from Southern Methodist University in Dallas.

In addition to García’s performance, the FSO will present works by Offenbach, Enescu, Broadway composer Stephen Sondheim, Frescobaldi, Dvorak, Khachaturian, and Piazzolla. Murdock said it will be a varied program with popular, Romantic, and contemporary styles.

The FSO has been conducted by Rebecca Murdock since the 1970s. The orchestra has grown and developed into a well-respected performance ensemble featuring internationally acclaimed soloists who perform frequently with the 50-piece ensemble.

Tickets may be purchased at the door for $10 for adults, $20 for families, and $5 for students.