(Laramie, WY) – For the second consecutive game, the Wyoming Cowgirls got a big game from Dagny Davidsdottir and as a team, had a big second half against Air Force Monday night on their way to a 59-46 victory inside the AA.

For the second straight game, Davidsdottir tied a career-high with 16 points in the win and on Monday, also tied a career-best mark with 12 rebounds. Davidsdottir went 8-for-12 from the floor and also recorded a pair of blocks on the night as well.

“We came out in the second half and made a couple of shots and we got a couple of easy looks as well,” said Head CoachGerald Mattinsonpostgame.

“But the most important thing is we kept defending, if you can get 3-or-4 stops in a row on a team that pressures like Air Force and can extend the lead a little bit, it takes a lot of pressure off your team and then that helps you offensively.”

The Falcons actually got off to a great start Monday, scoring the first seven points of the game in the first 3-plus minutes to take a 7-0 lead. But, UW quickly found its footing thanks to back-to-back hoops from Davidsdottir, followed by consecutive 3-pointers byQuinn WeidemannandJaye Johnsonto give the Cowgirls a 10-9 lead with 3:29 remaining. The score was tied 12-12 after the first 10 minutes.

In the second, AFA would build its lead back up to five, 21-16 with 6:48 to play in the half, but the Cowgirls would reel that deficit in and eventually took a 24-23 lead into halftime thanks to three consecutive free throws fromMcKinley BradshawandTommi Olson.

“We’re going to continue to take it one game at a time. But right now to me, with this crazy year, winning and losing will take care of itself. We just have to keep playing hard and a little bit smarter and better each time. If we can do that and make it to the end of the season, I think we’ll be a pretty tough out,” continued Mattinson.

Johnson andAlba Sanchez Ramoshad nice nights offensively for the Cowgirls as they scored 11 and 10, respectively. Johnson went 4-of-6 from the floor and made a pair of 3-pointers while also notching a pair of steals defensively.Tommi Olsononce again had a solid, all-around performance as she scored eight on 3-of-5 shooting, dished out a game-high six assists and also tallied three steals on the night.

The Cowgirls really put the clamps down defensively on the night, as the Falcons shots just 26 percent (15-for-58) from the floor, including just 6-of-25 in the second half. Wyoming meanwhile, shot 48 percent (23-for-48) from the floor and went 5-of-12 from 3-point range. The Cowgirls were an impressive 14-for-25 (56 percent) from the floor in the final 20 minutes.

Both teams grabbed 35 rebounds on the night with AFA having a 9-4 edge in second-chance points. The Cowgirls however were dominant inside, outscoring the Falcons 30-6 in points in the paint while also notching an 11-5 edge in fast break points on the night.

Next up, the Cowgirls will finish their six-game in 14-day stretch with a trip to Reno to face Nevada January 22 and 24. Friday’s contest is set to tip at 7 p.m., Mountain Time.

The Wyoming Cowboys knocked down a season-high 16 three pointers in a 77-58 win at Air Force on Monday evening inside Clune Arena in Colorado Springs.  The 16 threes by the Pokes was the most since hitting 16 against Northern Iowa on Dec. 3, 2016. UW moves to 8-5 overall and 2-4 in conference play with the Falcons falling to 4-8 overall and 2-5 in the MW.

It was the largest conference win for the Pokes since defeating Utah State by 19 points in the Arena-Auditorium on Feb. 6, 2016.

“Our guys did a really good job of going back and watching film,” UW head coach Jeff Linder said.  “A team like Air Force needs to have pressure put on them. We took them out of rhythm and disrupted what they wanted to do. Our ball pressure allowed us to do that tonight.”

Freshman Xavier DuSell added a career-high 19 points on the night including a career best five three pointers. It was the third game in the last four he has reached double figures. Sophomore Kenny Foster added 13 points for his fifth game this season in double-figures. It was his first game in double figures in conference play. Freshman Marcus Williams added 10 points, as he has scored in double-figures in every game this season. Junior Hunter Maldonado added 11 points for his 12th game in double figures this season. Junior Hunter Thompson led the Pokes tying a season-high with nine rebounds.

“We did a good job not settling for shots,” Linder said. “Our movement tonight was excellent and our energy and cutting is much better tonight. Our guards did a great job getting to the paint and kicking out for wide open threes. It was truly a collective team effort tonight.”

The Pokes got off to a 10-2 lead in the opening five minutes of the contest thanks to a pair of threes from Williams and DuSell along with baskets from Marble II and Foster. Wyoming held the Falcons 1-of-6 from the field to open the game.

The Falcons went on a 5-0 run for a 10-7 Wyoming lead, but junior Drake Jeffries and Williams added three pointers to give Wyoming a 16-7 advantage with 11:42 left in the opening half. Wyoming would add two more triples, but the Falcons responded with four-straight buckets for a 22-16 game with 9:20 left in the opening stanza.

The Pokes would go scoreless for over two and a half minutes allowing Air Force to make it a five points contest at 23-18 at the seven minute mark of the half. But the Pokes would do the game thing to the Falcons and built the lead back to double-digits at 30-18 with 4:07 left in the half. Wyoming hit three-straight shots during the run with Williams, Marble II and Foster leading the charge.

Wyoming continued to put the presser on offensively with foster and DuSell getting to double-figures, as the Cowboys took a lead as much as 16 points with under two minutes left in the half. Thompson hit a buzzer beater from behind the arc to take a 38-23 lead into the half.

The Falcons went 6-for-6 to open the second frame, but DuSell helped the Pokes maintain the double-digit lead tying his career high 14 points in the opening minutes of the half for a 45-35 Wyoming lead. Foster added three freebies from the line to make it a 15-point game at 50-35 15:36 left in the game.

Jeffries added a three-pointer to give Wyoming a 20-point advantage at 58-38 with 11:49 left in the game. Maldonado and Marble II went to the paint and held the Pokes build a 66-42 lead with under nine minutes remaining.

Wyoming kept the pressure up and held the Falcons to only right field goals to close the half on their way to the 77-58 win.

Air Force was led by Nikc Jackson with 19 points. A.J. Walker added 13 points on the night.

Wyoming returns to action on Friday hosting Nevada in the Arena-Auditorium in a 6 p.m. MT start on Stadium. 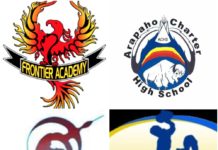 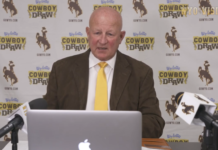 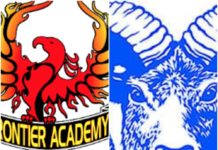