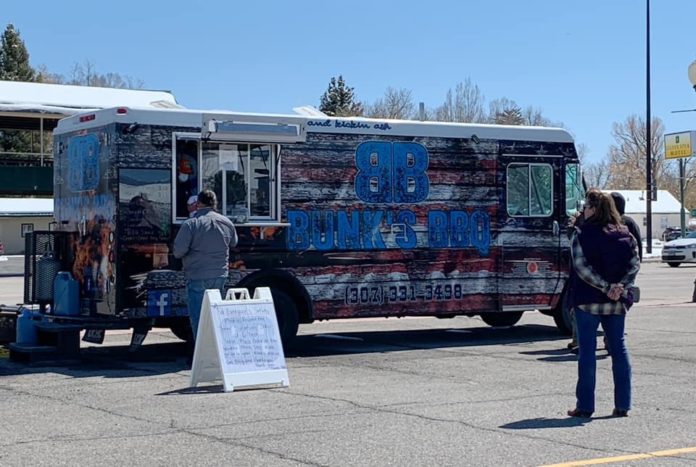 “#rivertonbiz, shares the stories of local movers and shakers of our Fremont County economy.“

(Riverton, WY) – The much-anticipated arrival of the Wyoming original, Bunk’s BBQ known for being “fired up and kickin ash” is here for all of 10’rs to enjoy in a single set location. Folks of Fremont County along with BBQ fans alike may be familiar with the rustic American flag wrapped food truck with giant bright blue lettering, serving out American BBQ favorites like dry-rubbed spare ribs, smoked sausages, and mac & cheese.

The popular food truck that operates from place to place mostly in and around the Riverton, Hudson and Lander areas will now have a brand new brick and mortar storefront location in Riverton. The beloved food truck will still be in use from time to time and according to Bunk’s will have a full-time food truck staff that will take the truck on the road to various other local towns in the area during the warmer months, as well as their fair and community events also.

The restaurant will now occupy the previous space held by the old Provident Federal Savings and Loan bank building, (formerly Pizza Plus, the Rec Center, Atlantic City Federal Credit Union and Farm Bureau) located at 201 E Washington in Riverton and plans to officially have its grand opening on Thursday, January 14th, 2021.

Bunk’s BBQ strongly recommends calling for a reservation ahead of Thursday’s big opening day. Reservations are not required but encouraged for Thursday, as they will try and seat everyone but reservations will take priority.

The hours of Bunk’s restaurant will start out Thursday through Saturday from 11-8 pm, sadly this week NFL football and Bunk’s BBQ will have to wait as they will be booked for a private event this upcoming Saturday, January 16th, 2021, and will be closed to the public on that day.

According to Bridgett Bunker, co-owner of Bunk’s BBQ, the restaurant recently held a “soft opening” which gives a chance for the staff to practice their skills and work out any issues that may need to be resolved.

“The soft opening had an amazing turnout, and went pretty smoothly,” said Bridgett.

According to Bunk’s BBQ, they do not currently have a most popular dish, stating that

“Everyone likes everything, but he (James Bunker) is definitely known for his brisket.”