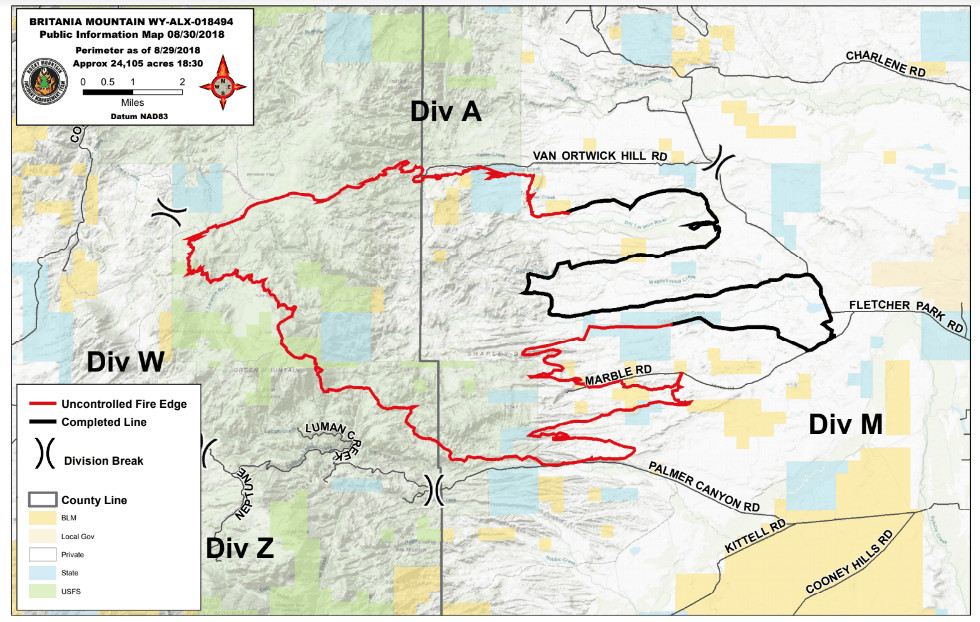 Yesterday, firefighters continued line construction on the north flank of the fire. Crews also worked to prevent the fire’s eastward spread by constructing direct line, or fire line on the fire’s active edge, in the lighter fuels at lower elevations. On the southeastern edge of the fire, crews assessed options to construct indirect fire line, or fire line constructed away from the active fire edge. On the south flank of the fire, crews worked along the Palmer Canyon Road to keep the fire north of the road as well as protect homes and other values at risk in that area. Aviation resources were used to assist firefighters working on the ground with both single engine air tankers and water drops from helicopters to slow the forward spread of the fire as well as help firefighters hold roads being used as fire lines. On the western flank of the fire, hand crews continued working in steep terrain seeking options to construct indirect fire line to the northwest of the fire.

Weather & Fuel Conditions: Thursday’s weather will be similar to Wednesday’s, with a Red Flag Warning in effect due to low relative humidity and gusty winds. Temperatures are expected to be 1-2 degrees higher than Wednesday with highs in the low to mid 80s and relative humidity in the single digits on the fire. Winds are expected to be out of the west-southwest from 14 to 20 mph with gusts up to 28 mph with an isolated chance for thunderstorms in the area, which could bring erratic outflow winds.

The evacuations in the Laramie Peak subdivision were lifted on Tuesday; residents will continue to use Fish Creek road to access the area. The area remains on pre-evacuation status and residents should be prepared to evacuate with a thirty-minute notice. Fletcher Park Road is closed from west of the Laramie River to north of Van Ortwick Hill Road. To sign up for emergency alerts, residents of Platte County can visit https://bit.ly/2Lyewed; Albany County residents can visit https://bit.ly/2wx8wwO to sign up.

Evacuees and property owners affected by the fire in Albany County should email [email protected] with contact information including name, address, email, and phone number. This will be used for sharing information from Albany County Emergency Management.