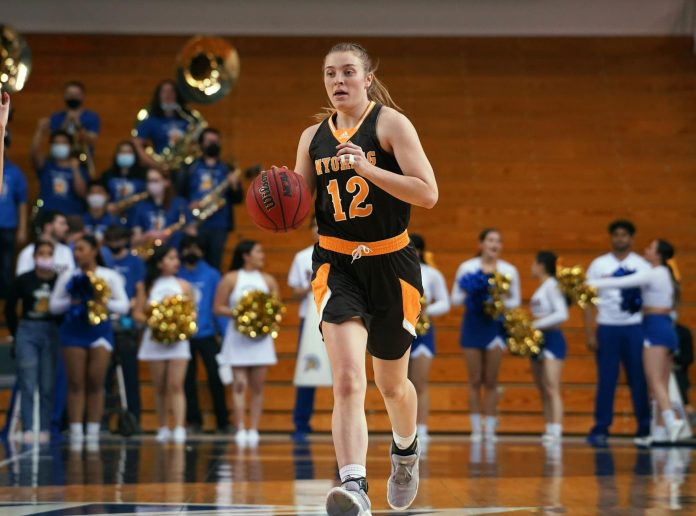 SAN JOSE, Calif. (Feb. 14, 2022) – McKinley Bradshaw scored a career-high 33 points, and the Cowgirl offense was lights-out in the first half as Wyoming defeated San Jose State Monday night on the road, 84-64. The win is Wyoming’s fourth-straight.

In the second quarter, it was more of the same from the Cowgirl offense as they opened the frame on a 24-6 run and led 54-26 with 2:23 to play, leading to the Spartans’ second timeout of the quarter. San Jose State closed the gap a bit to end the half, closing on a 6-2 run as UW led 56-32 at the half.

The second half opened with more of the same as in the first half for UW, as it continued to blister the nets offensively. The Cowgirl onslaught kept coming for most of the third and they led by as many as 31 points, 71-40 with under four minutes in the quarter. However, San Jose ended the third on an 10-0 run and the Cowgirl lead was down to 71-50 after three. Wyoming went scoreless the final four minutes of the quarter.

In the fourth, SJSU picked up where it left off in the third and cut the UW advantage down to 71-54 before Allyson Fertig’s layup ended the Wyoming drought. The Cowgirls’ offense wasn’t as sharp down the stretch, but it was enough to win comfortably.

Bradshaw had an exquisite game, scoring her career-high, which is tied for the seventh-most points in a single-game in program history. Bradshaw shot 13-for-21 from the floor and made 4-of-6 from 3-point range. It was Bradshaw’s first-career 30-plus-point game and the first time a Cowgirl has scored 30-or-more in a game since Tereza Vitulova had 30 against San Diego State in 2020. Fertig added 13 points and seven boards. Quinn Weidemann chipped in with six points on a pair of 3-pointers. Paula Salazar led the Wyoming bench with eight points.

For the game, Wyoming shot 57.9-percent and 9-for-15 from beyond-the-arc. The Cowgirls also had 48 points in the paint, eight points off turnovers and eight second-chance points. The Wyoming bench scored 22 points on the night. SJSU meanwhile, shot 36.5-percent from the floor and hit 6-of-24 from 3-point land.

Next up, the Cowgirls close their long road stretch as they will conclude their three-game road trip and six-game stretch with five on the road, Thursday, February 17 at Colorado State. The 6 p.m., contest was originally scheduled for Feb. 16 but was moved back a day.

The Pokes return home with the Bronze Boot