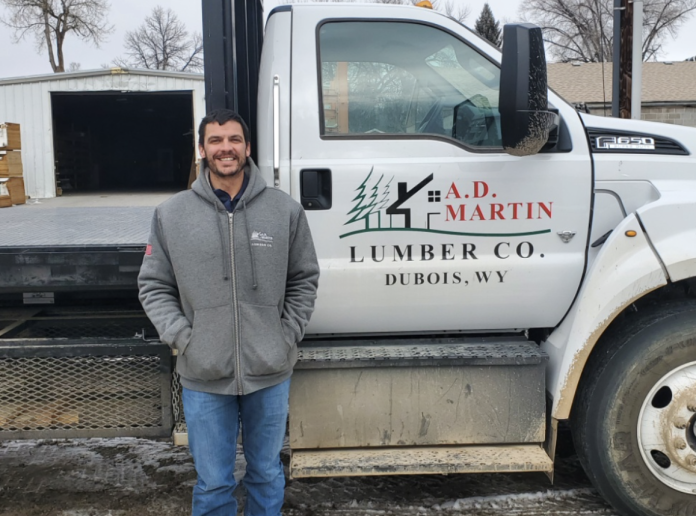 “#rivertonbiz shares the stories of local movers and shakers of our Fremont County economy.“

As 2022 begins, the Riverton Chamber of Commerce is pleased to announce their first Business of the Month honoree, the AD Martin Lumber Company, doing business on Riverton’s West Main Street since 1954.

The story begins with the arrival of Mr. AD Martin to Fremont County in the mid-’20s, then opening a long-running and successful business in Lander. As the 1950s dawned, he was winding down his career in the horse-drawn implement sector. He was looking forward to retirement and had invested in the Noble Lumber Company of Riverton as a means of bettering his income. Not long after, having become unhappy with the slow pace of his many days off, and hearing about the forthcoming sale of another lumber company in Riverton, AD made his move and purchased the business on West Main without telling a soul. The next day, he phoned his two sons, Davis and Jack, urging them to quit their current jobs and come to work for him, back in their hometown of Riverton Wyoming. Thus began the long history of the AD Martin Lumber Company – the origins of a family business that has been passed down through the generations and now sits on four sites in Riverton, Dubois, and Laramie.

Davis and Jack would run the company for many years before turning it over to their respective sons, Mike and Joe. For many years, AD Martin Lumber rode the wave of prosperity that swept through Fremont County during the uranium and oil booms, growing along the way. In 1993, Mike bought out Joe’s share of the organization. During this time, Mike and Kate’s family was growing and when their son John reached the age of twelve, he began his involvement in the company’s truss plant, located near Central Wyoming Airport. After high school, John would leave for college in Laramie, a time he recalls fondly. Then, as graduation neared, he received a phone call from his father, inviting him to return home and join the family business. John talks about arriving at a point, 10 years later, where he was ready to take the helm and Mike was ready to slow down and enjoy spending more time with family and his many interests. So in November of 2013, John Martin was officially installed as owner and general manager of the AD Martin Lumber Company, the position that he holds to this day.

If you’re at the AD Martin yard, don’t be surprised to see Mike – he comes around almost daily because as John likes to say, he enjoys the free coffee and touching base with old friends that have been doing business there for a very long time.

Most recently, John opened the newest AD Martin Lumber location in Laramie and tells us that is doing very well. The truss plant recently expanded and, according to John, sells products to builders all across the Cowboy State. A true family business going all the way back to 1954, continuing to build on the strength of their long-standing commitment to customer service and providing the very best in building materials to contractors and homeowners across the area – AD Martin Lumber.

Click here to listen to the full interview at 4:15 pm on Jack FM.

A special thank you to the Riverton Chamber of Commerce for this Business Spotlight. They will be singling out a member each month and highlighting them on Jack FM and County 10.