“Our community is large and wildly diverse, which is at the same time our strength and our weakness. #Activate10 is a movement seeking to increase communication between individuals and organizations across Fremont County and to promote positive action in our communities.”

(Riverton, WY) – A grassroots effort is underway to create a local cornhole league. The initial plan is for a competitive recreational partner (doubles) league that would go for 10 weeks in both the summer and winter.

Spearheading the effort is Riverton resident Ed Newbold who was surprised by the interest in forming a league after floating the idea to the community on social media recently.

This significant interest prompted him to create the Fremont County Cornhole Facebook page as a central location for information and updates on the league.

Ed has already secured a few corporate sponsors for boards but is still seeking additional support. His goal right now is to start the league on June 1st.

A park, possibly Sunset, will be the venue for this first summer, he explained. An indoor venue for the winter months will be needed. He has a few possibilities right now, but is open to suggestions and ideas. It does need to be a fairly large space.

Local league goals include having a variety of tournaments for not only players to compete but as fundraisers to give back to the community. He also hopes to join the American Cornhole League (ACL) to compete with other teams statewide or even broader.

Team fees for the league are being figured out right now. That information will be shared on the league’s Facebook page in the coming weeks.

Local artist Shannon Watts is also creating a new logo for the team.

If you are interested in being a sponsor or joining the league email fremontcountycornhole@gmail.com or send a message on the Facebook page.

For those who are not familiar with the game:

“Cornhole or Corn Toss is similar to horseshoes except you use wooden boxes called cornhole platforms and corn bags instead of horseshoes and metal stakes. Contestants take turns pitching their corn bags at the cornhole platform until a contestant reaches the score of 21 points. A corn bag in the hole scores 3 points, while one on the platform scores 1 point,” according to American Cornhole. 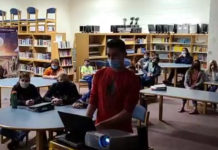