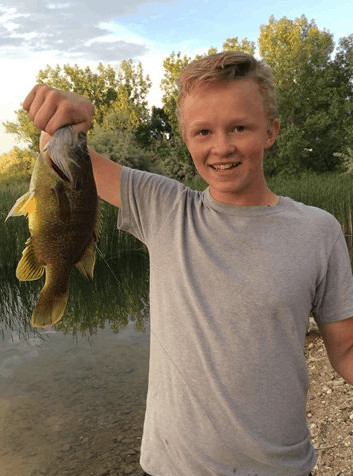 “Just one more cast, please,” Chris Castleman pleaded several times the evening of June 7. Since his dad relented, it might be fitting to give him an assist for the new Wyoming green sunfish state record his 14-year-old son now holds.

On the very last of the “just one more” casts, Chris hooked a nice fish on his worm and bobber. He and his dad, Allen, knew the fish was much bigger than the panfish they’d been catching the evening of June 7 at Bryan Stock Trail Pond in Casper and thought it might even be a nice bass.  Landing it surprisingly revealed the same species of panfish they’d been catching.

Other anglers at the pond suspected the fish was something special and encouraged the duo “to get it checked out.” That not only included weight — but also species. Neither the Castlemans nor their fellow anglers knew if it was a bluegill, green sunfish or pumpkinseed.

Sportsman’s Warehouse didn’t know either, but the father and son were further encouraged by an employee there declaring, “That’s the biggest panfish I’ve ever seen.”

The next morning Ridley’s Market generously weighed the fish on their certified scale – 1 pound, 4 ounces. At the Casper Wyoming Game and Fish Department Office, the fish measured – 12.25 inches long and 11-inch girth – was officially identified as a green sunfish by Fisheries Supervisor Matt Hahn, the state record form was filled out and a new record was on the books.

The fish resoundingly beat the former state record caught at the Lovell Ponds in July 2010 by nearly 6 ounces. The world record weighed 2 pound, 2 ounces and was caught in Stockton Lake near Springfield, Missouri in June 1971.

“This was a one in a thousand, maybe even one in 10,000 fish,” Hahn said about the frequency of a fish this size in the Wyoming green sunfish population.

The green sunfish is native to middle America from the Great Lakes to Texas and as far west as Nebraska. It was introduced to Wyoming primarily as forage for bass, but also because it generally cooperates with warm-water anglers.

A state record was the last thing on Chris’ mind that evening, but he was in pursuit of an angling goal: the “Pan Pair Challenge” for young anglers. By catching two of Wyoming’s panfish species, anglers receive a color certificate from the Game and Fish. There are six other youth angling challenges ranging from catching native fish to Wyoming’s most unique game fish.  Check out the “Wyoming Youth Fish Challenge” on the Game and Fish website for more information.

Reflecting his zeal for angling, Chris says, “I hope to get all the (fish) challenges in time.”

“Catching a state record was terrific,” the eighth grader-to-be added. “One of the best things was being with my dad when it happened.”

Having his state record fish mounted and on the wall will also help him remember the experience.

Arctic air settles into the 10 Sunday