(Powell, WY) – On April 10th, the Wind River Composite Squadron of the Civil Air Patrol sent four cadets to their first orientation rides of the year.

For the powered aircraft syllabus these are:

The pilot for this event was private pilot Lt Col Mike Carlson. The plane was a Cessna 182T with a Garmin G-1000 integrated flight instrument system and a Forward-Looking Infrared (FLIR) thermographic camera.

All flights were out of the Powell Municipal Airport in Park County. Col Carlson has flown O-rides for about 10 years and typically flies 5-10 such flight per year and flew six sorties at this event. His wife, Lt Col Beverly “BJ” Carlson, also helped by organizing the event and doing the substantial but necessary paperwork. They are members of the Yellowstone Regional Composite Squadron based in nearby Cody which hosted the event.

From the same squadron, C/SMSgt Elijah Swaney attended to support them and the
participating cadets.

“My goal here today,” Swaney said, “is to interact with cadets from outside my squadron. I believe this helps me to develop my leadership skills and assist the Senior (adult) members in managing the O-rides for the cadets.”

He had planned on taking his fourth powered flight O-ride, but the scheduled plane and pilot were unable to make the event. So he stayed to support the event for the other cadets.

For Matthew Stong, it was his first time ever flying in an aircraft. “I have practiced flying on a simulator, but the real aircraft was quite different! The real Cessna 182 is more responsive than the simulated version. Flying a real aircraft is much simpler than I expected and the view from 2500 feet was amazing!”

Cadet Lasnoski has flown before, but not in the pilot’s seat, “My expectation was to travel here to participate in the cadet orientation flights as a passenger. What was unexpected for me was to actually be able to operate the controls, to steer and climb in the aircraft! This was not just a thrill for me, but part of the experience I need to become a pilot and advance my plans to attend the USAF Academy.”

“The best part of the adventure was that everyone returned home safely with new stories of their experiences to share with friends and family,” Capt Falken said. 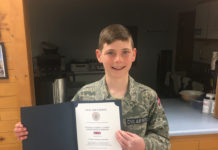 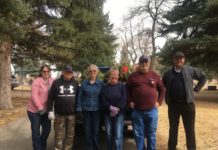 7 volunteers turned out for spring cleanup of WAA 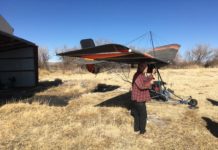