(Moose, WY)– Teton Interagency Dispatch Center received an emergency call at approximately 12 pm on Monday, February 22nd, about a skier involved in an avalanche in the Broken Thumb Couloir on the peak known as 25 Short in Grand Teton National Park.

A party of three local residents departed from the Taggart Lake Trailhead this morning, with an intent to ski the Broken Thumb Couloir. The party was skiing one at a time in the upper part of the couloir. Matthew Brien, a 33-year-old Jackson, Wyoming resident, was leading the group, entering the narrow area of the couloir above the rappels when an avalanche occurred.

The avalanche was up to two feet deep and fractured fifty to one hundred feet above Brien, sweeping him over the rappel and downslope for approximately one thousand feet.

Other members of the ski party dialed 911 and reached Teton Interagency Dispatch Center to report the incident and also called two friends who were skiing down canyon on an FRS radio and told them about the avalanche. Both parties made their way to Brien and found him partially buried. They removed him from the debris and initiated CPR.

The Teton County Search and Rescue helicopter with park rangers immediately responded with aerial reconnaissance to determine if a short-haul rescue would be an option. Due to gusty winds, short-haul was not feasible. The helicopter landed on Taggart Lake and rescue personnel skied to the scene.

Brien suffered significant trauma and was determined deceased at the scene. His body was flown to a frontcountry location and transferred to the Teton County Coroner.

The other members of the parties skied out. 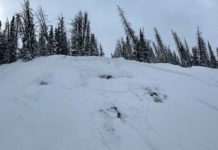 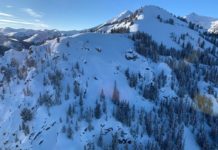 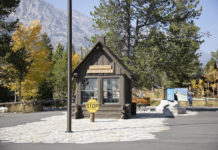