#10Life: Spending a day with a Master Bladesmith

#10life is County 10 series to share and celebrate everything that’s great about local life in Fremont County, brought to you by RE/MAX All-Star, Realtors.

There is something about making an item that causes you to cherish it more than if you had just purchased it at a store. Maybe that feeling comes from simply being proud of yourself for making it or you achieved a goal perhaps. Whatever the reason might be I know I felt pretty darn accomplished after making these two pendants. What made it even better was being taught how to make these by a local family.

Before known cases of COVID-19 were in Fremont County, County 10 spent a Sunday with Audra and Mike Draper. They have owned and operated Draper Knives in Riverton for over 20 years, and it’s fairly likely you’ve heard their names before. Audra has been featured in many articles including Wyoming PBS.

Pulling up at their shop on Creek Drive north of Riverton you are greeted by Audra and their very excited pup Molly. FYI, Molly will untie your shoes. You are not going crazy nor did you forget how to tie your shoes, it’s Molly.

Audra and Molly escorted us through the shop and into their home, jokingly named the “Blade and Breakfast.” We chatted with Mike and Audra over coffee and delicious pull-apart bread while completing a few forms before getting started.

Starting in 1992, Audra was mentored by Riverton resident Ed Fowler in making straight steel knives. Four years later she became a Journeyman Smith and began working with Damascus steel. In the same year, she and Mike got their own shop and started Draper Knives.

“We started traveling to Montana to meet with bladesmiths there who were also interested in Damascus,” Audra shared. “They would host ‘Hammer ins’ where they would get together and share knowledge and learn from each other.”

After finishing up the paperwork, we headed to the shop to make Damascus jewelry. First was, of course, lessons in safety while working with metal and machinery. Then an introduction to the process that made everything as easy as hand making pendants can be. Step-by-step Audra walked us through selecting a piece of Damascus, sanding it down, test etching, buffing, and so much more.

I don’t think it was something I would have done. It was really frustrating that people wouldn’t talk to me about blades that I made, but would only talk to Mike. They just didn’t buy that I was making the knives. I’m going for my masters and knowing that no women had done it was just icing on the cake.

Making the first pendant was super empowering (mountain pendant pictured above). I don’t remember what it was like to ride my bike without training wheels for the first time, but that’s how I equate this in my mind. Audra provided an excellent balance of walking you through the many steps of creating a final, wearable product and yet allowed you room to make your own decisions.

“I love this,” Audra explained about teaching. “I love making knives, but when I can see the expression on a student’s face and their sense of pride about what they made. Well, it gives me goosebumps.” Audra and Mike usually teach three classes a month. One four-day knife making class, one jewelry class, and one forging class.

While working on the pendants, veteran class takers Mary Ellen and Brandi were also there working on projects. It became apparent that this was a community, if not a family. Both of them and other members of their family’s had taken several classes with Mike and Audra. Mary Ellen and Brandi both jumped in to share tips, ideas, and whatnot during the process. It was a true sense of bonding.

All in all, it was an experience unlike anything else I’ve ever had in Fremont County. This is not something that every town or county has available. Folks travel from out-of-state to take classes with Audra and Mike. You can learn more about their classes, pricing and see some cool photos of their work on the Draper Knives Facebook page or on their website.

Below are a few more photos from County 10’s day with the Drapers. 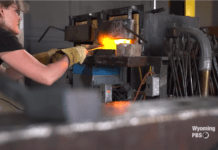 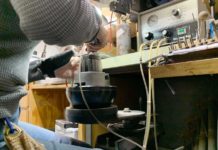